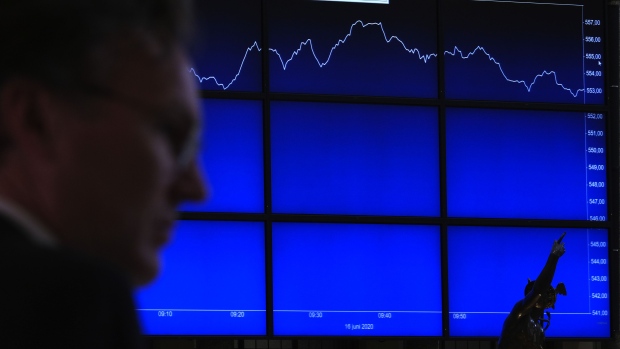 The AEX index curve is displayed inside the Amsterdam Stock Exchange, operated by Euronext NV, in Amsterdam, Netherlands, on Tuesday, June 16, 2020. For two years in a row, Europe’s largest stock-market listings have taken place in Amsterdam, which has beguiled companies with a deep pool of international investors and corporate governance norms that tilt in favor of management teams. Photographer: Yuriko Nakao/Bloomberg , Bloomberg

If traders can shift their gaze from the rising rate of global COVID-19 infections, risk assets should rally as the new week gets underway.

The stronger U.S. equity-market performance on Friday, underpinned by optimism that an effective treatment for the virus might be closer, will likely keep bulls in the driving seat during Monday’s Asian trading hours, according to investors.

Set against that are any number of potential pitfalls. Authorities in China, scheduled to report growth data on Thursday after the economy’s 6.8 per cent first-quarter contraction, warned last week about the dangers of a stock-market bubble following the Shanghai-Shenzen CSI 300 Index’s near 35 per cent rally since mid-March.

Earnings season is about to start, with banks such as JPMorgan Chase & Co. and Wells Fargo & Co. among the first to report. And the virus itself shows no sign of abating, as confirmed cases topped 12.7 million on the weekend.

“The COVID-19 pandemic continues to dominate the outlook,” Michael Grady, head of investment strategy and chief economist at Aviva Investors in London, said in a report. “Downside risks include further outbreaks, higher saving and changed behavior until a vaccine is found.”

Aviva is staying “modestly underweight global equities because of stretched valuations and elevated risks to the economic outlook” but overweight in credit “based on relatively more attractive valuation metrics, as well as being supported by central bank purchases,” he said.

Europe remains a bright spot ahead of Thursday’s European Central Bank decision and a meeting of EU leaders starting Friday to agree on a regional recovery fund. The growth in virus cases across the eurozone remains relatively low.

Approval of the recovery fund will act as a “positive catalyst for European equities,” according to Graham Secker, chief European equity strategist at Morgan Stanley in London.

Stocks in Europe and the U.S. rallied on Friday after earlier declines in China and other Asian markets. The Euro Stoxx 50 Index and the S&P 500 Index both advanced more than 1 per cent, U.S. 10-year Treasury yields rose 3 basis points and the Bloomberg Dollar Index slipped 0.1 per cent.

Middle East stock markets continued in the same vein on Sunday, taking their cue from Brent oil’s 2.1 per cent gain on Friday. Bahrain’s main index climbed more than 2 per cent, Israel’s added 1.2 per cent and Abu Dhabi’s rose 0.5 per cent.

The following is a round-up of comments looking ahead to a week in markets:

“Animal spirits have been unleashed in China and US$1 trillion in shareholder wealth created since June 30. The Nasdaq is trading near all-time highs and the S&P 500 is trading with a bullish bias. This rally is powered by central bank liquidity and the equity markets continue to be a buy on dips with 3,000 a strong support area for the S&P 500.

“The Chinese yuan has strengthened with the dollar below the 50-, 100- and 200-day moving averages. Last week, the U.S. administration went ahead with the sanctioning of Chinese officials involved with Hong Kong law and is in the process of taking more action against Huawei. The newsflow was negative but the rally in the S&P 500 is powered by liquidity in the system.

“The ECB also is doing a lot of work in the background by its quantitative-easing program and Italy’s bond spread with Germany has been kept under check. This year ECB QE will be more than the bond issuance of governments, which means yields will be kept under check. Dips are likely to be buying opportunities.”

“This week’s ECB rate meeting isn’t expected to yield too much in the way of surprises. At its last meeting the bank hiked its pandemic emergency purchase program by another 600 billion euros (US$678 billion) to 1.5 trillion euros, with the time horizon pushed into the middle of June 2021.

“The Chinese economy saw a quarterly contraction of 9.8 per cent in the first quarter of this year, pushing the annualized growth number sharply into negative territory of minus 6.8 per cent.

China exports “only really improved as a result of PPE and other medical exports, yet forecasts expect to see a V-shaped rebound in the second quater of 9.6 per cent. This seems barely credible at a time when retail sales have been negative in April and May and are also expected to decline in June.”

“The potential a of a viral relapse into lockdown conditions is a major risk to the sustainability of oil prices around their current levels, not to mention a drag on them pushing significantly higher.

“The OPEC+ joint market monitoring committee will meet this week to decide whether to push forward with the producers’ bloc plan to begin tapering its production cuts from August —- as proposed in early June —- or to maintain the deeper level of cuts that have been in place from May.

“We have assumed that OPEC+ countries stick to their targets fully for 2020-21 and the increase in levels won’t be enough to push the market into surplus, provided demand recovers as strongly as the IEA assumes.”

“Global equity markets are likely to remain volatile amid concerns of resurgence in new cases and the subsequent restrictions on business activity to curb the new cases. Investors will also closely monitor the upcoming second-quarter earnings, which should help in reassessing economic recovery during the quarter.

“In the MENA region, investors will continue to remain cautiously optimistic about the upward revision in oil demand for 2020 as the rapidly evolving COVID-19 situation could potentially depress any upside in oil prices going forward

“Moreover, the upcoming earnings season will also be an important indicator for the equity markets as it will help in gauging the recovery in economic activity post the reopening of regional economies.