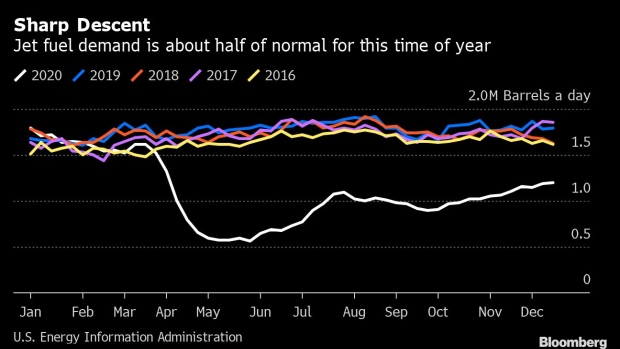 (Bloomberg) -- Even with air travel surging ahead of the Christmas holiday in the U.S., demand for jet fuel is unlikely to recover to historic levels anytime soon.

Foot traffic through airports last weekend topped 1 million people a day for three straight days -- something that hadn’t happened since March before the coronavirus shut the nation down. But that is still less than half of what it was at this time a year ago, which doesn’t bode well for a part of the oil barrel that will by most estimates will be the last to recover.

The spread between the price of jet fuel and crude oil, a rough gauge of how much a refinery can make for producing it, rose to $8 a barrel. That’s the highest since the pandemic forced most flights to be grounded but far below the roughly $21 margin a year ago.

“It’s positive to see traffic picking back up but it’s still about 63% less than last year,” Bloomberg Intelligence oil analyst Brett Gibbs said. “We don’t see demand materially recovering until the second half of 2021 at the earliest with mass vaccine availability.”

Likewise, domestic jet fuel demand has risen to the highest since April, according to U.S. government data but that’s still half of where it was at the same time last year.

Still, refiners have managed to keep inventory from ballooning out of control by shifting jet fuel into diesel stockpiles, something Gibbs said is still going on. With help from those moves, U.S. jet fuel stockpiles last week were at seasonal six-year lows, the Energy Information Administration said.

Globally, the market has seen an uneven recovery. While China is now scheduling 10% more domestic flights than a year ago, other parts of the world are far behind, hobbling jet fuel consumption.

Europe’s more severe restrictions have opened opportunities for the continent’s refiners to send extra barrels of middle distillates, which include both diesel and jet fuel, to the U.S. American diesel imports, mostly to the East Coast, have held above 400,000 barrels a day for two straight weeks. The last time that happened was in February 2019.

“It feels like the recent uptick in flows from Europe is more a supply push than a demand pull,” said Arthur Richier, a freight analyst at data company Vortexa. “Considering flows have been growing throughout the fourth quarter as restrictions were re-imposed across Europe, these feel like overproduced, distressed barrels looking for a home.”