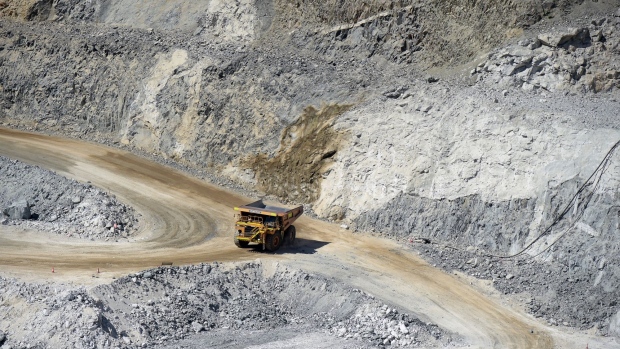 The Pilbara Minerals Ltd. Pilgangoora lithium project in Port Hedland, Western Australia, on Friday, July 29, 2022. The highest bid for material at an auction run by Australia's Pilbara Minerals dropped for the first time since the exchange was launched last year. , Bloomberg

(Bloomberg) -- The soaring profits unveiled by Australian miners this week were a beacon of light amid the gloom dominating economic headlines. Yet the coming months look more challenging, particularly for companies without exposure to clean energy.

Miners that dig up materials vital to decarbonization led the way in the first half, with Pilbara Minerals Ltd. and Allkem Ltd. reporting record earnings as prices for lithium soared.

The eye-popping profits Down Under were reaped on the back of surging commodity prices. But with problems such as battered supply chains, a slowing global economy and waning demand in top customer China now looking hard to budge, the good times for many Australian miners may be over.

“A lot of companies have reported record earnings, record cash flow and record returns to shareholders, and in most of the instances it’s been 100% price-driven,” said Glyn Lawcock, head of resources research at Barrenjoey. “Massive” cost headwinds remain, and the coming 12 months would likely see base-metal producers in particular struggle, he said.

The divide between Australian base metals miners and those involved in extracting new-energy resources -- and even coal -- looks set to become more stark in the coming months.

Soaring global demand for electric vehicles promises to keep lithium prices high for at least the next six months, Credit Suisse analyst Saul Kavonic said in an interview this week. Though beyond that he said the outlook was less certain with more producers coming online. Australia is the world’s biggest producer of the key material in lithium-ion batteries.

Perth-based Pilbara Minerals grew its revenue by 577% over the year, and the company is optimistic that lithium demand will remain high, driven by a rapid uptake of EVs.

Allkem, a major lithium producer with operations in Australia and Argentina and plans to expand to Canada and Japan, posted full-year net income of $337 million, compared with a loss the year before.

While China dominates processing of lithium ore into battery-grade products, the two Australian companies are working to change that. Pilbara is building a plant in South Korea with Korean steelmaker POSCO, while Allkem is constructing a facility in Japan in a joint venture with Toyota Motor Corp.

Lynas Rare Earths Ltd., whose products are used in EVs and wind turbines, also posted its biggest ever profit on the back of the quickening energy transition.

Iluka Resources Ltd., which specializes in mineral sands used in an eclectic range of products including paints, ceramics, sunscreen and hip replacements, this week posted its highest ever full-year profit, soothing market fears that global headwinds were reducing demand. It was helped by a supply crunch caused by Russia’s invasion of Ukraine and ongoing issues at Rio Tinto Plc’s South African mineral sands mine, it said.

Australia’s Rise as Green Superpower Will Supercharge the World

Meanwhile, South32 Ltd., a diversified miner that was created through a spinoff of some of BHP’s assets in 2015, reported record underlying earnings soared fivefold to $2.6 billion.

While South32 still derives a large chunk of its revenue from fossil fuels, Chief Executive Officer Graham Kerr on Thursday confirmed the company would not pursue new coal projects, two days after it backed away from a planned $700 million expansion of an existing coking coal project in Australia. The company said coking coal may have only two more decades in the steel-making process before green alternatives such as hydrogen replace it.

Still, Whitehaven Coal offered a dramatically different outlook. After posting its highest ever profit of A$1.95 billion ($1.36 billion) on the back of record prices for the fossil fuel, Chief Executive Officer Paul Flynn predicted demand for both thermal and metallurgical coal would remain strong “well after 2050.”

(Updates with Lynas in 11th paragraph.)