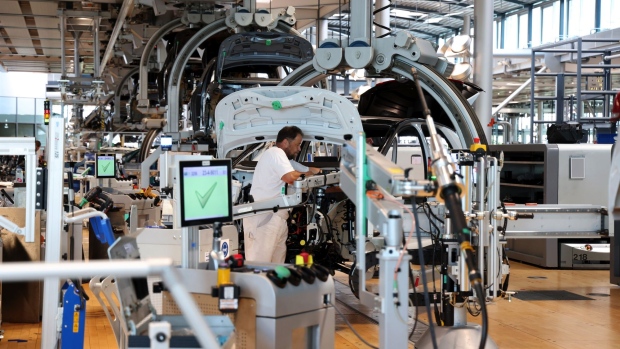 A worker secures fittings under the hood of a Volkswagen AG (VW) ID.3 electric automobile on the assembly line at the automaker's factory in Dresden, Germany, on Tuesday, June 8, 2021. VW's supervisory board is proposing to investors to extend the contract of Chairman Hans Dieter Poetsch and board member Louise Kiesling for another term of five years at the next annual meeting, a spokesman said. Photographer: Liesa Johannssen-Koppitz/Bloomberg , Bloomberg

(Bloomberg) -- Germany’s economy is poised for a strong upswing in the second half of this year, with activity likely to reach pre-crisis levels as soon as this summer, the Bundesbank said.

The central bank’s updated projections, which are published twice a year, are more optimistic than in December. They see Europe’s largest economy expanding 3.7% this year and 5.2% in 2022.

“The German economy is overcoming the coronavirus crisis,” Bundesbank President Jens Weidmann said in a statement. The pandemic’s containment “will result in substantial catch-up effects, primarily in private consumption as well as in services sectors that had been impacted especially hard by the measures.”

On Thursday, the European Central Bank renewed a pledge to deliver faster bond buying even as it revised higher its own forecasts for the euro-area economy. It also proclaimed for the first time since December 2018 that risks for the region’s outlook are “broadly balanced.”

The decision by policy makers to pile on more stimulus reflects the ECB’s determination to entrench a rebound, while accommodating a rapidly shifting outlook as economies reopen. In Germany, restaurants, cafes, and shops have gradually restarted business after a drop in infection rates allowed restrictions to be lifted.

Still, the country’s powerful manufacturing sector is facing increasing challenges from supply-chain constraints, which the Bundesbank said “will abate only gradually over the second and third quarters and will continue to dampen export growth for a time.” Private consumption will likely remain the key driving force behind the upswing, it added.

On inflation, the institution maintained its stance that current price swings in some areas are being driven by temporary factors, including a return to higher rates of VAT, new carbon emissions certificates, and a steep rise in energy and food costs.

Still, price growth accelerated to 2.4% in May, and has encouraged critics in Germany to raise their voices over ECB policies. Weidmann acknowleded that more price rises are to come.

“It is possible that inflation rates could temporarily hit the 4% mark toward the end of the year,” he said.