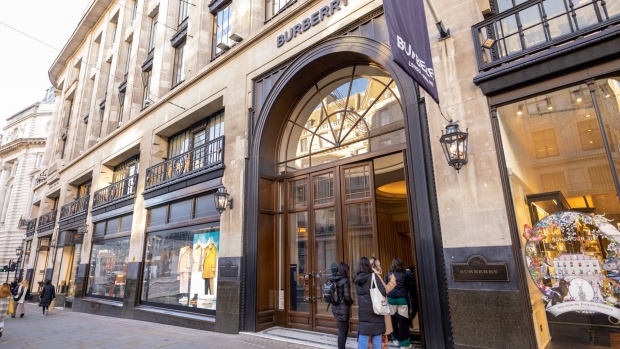 A Burberry Group Plc store on Regent Street in London, U.K., on Monday, Jan. 17, 2022. Burberry are due to give a third quarter trading update on Wednesday. , Bloomberg

Burberry Group Plc boosted its profitability to the highest level in eight years as the UK trenchcoat maker benefited from efforts to make its brand more exclusive and pricey.

The luxury-goods maker said Wednesday its adjusted operating margin widened to 18.5 per cent in its fiscal year ended April 2. The company reiterated revenue growth should be at a high single-digit percentage in the medium term. The stock traded little changed after rising as much as 2.9 per cent earlier.

It’s the first earnings release since Jonathan Akeroyd, the former head of Versace, became chief executive officer in March. Akeroyd is expected to follow the work of predecessor Marco Gobbetti, trying to make Burberry a higher-end brand by reducing third-party distribution and eliminating discounts on Olympia handbags and tartan scarves.

Burberry changed its logo in 2018 and has been updating its stores to create fancier backdrops for its designer clothes. A further 65 stores will be refurbished this year and by the end of the year a quarter of directly-operated Burberry stores will carry the new design.

“The company has made great progress over the last five years,” Akeroyd said. “I look forward to setting out my plans for building on these strong foundations.”

He said he will present his strategy in November.

The company said it will buy back 400 million pounds (US$495 million) of shares this fiscal year, a size that Morgan Stanley analysts said is bigger than expected.

Growth slowed in the second half, however. Since March, China’s lockdowns have damped business in that key luxury market, which Burberry depends on more than rivals.

The industry is also grappling with weak tourism and declines in stock markets that may lead the rich to trim spending. Burberry closed its stores in Russia in March after the country invaded Ukraine.

“Our outlook is dependent on the impact of COVID-19 and rate of recovery in consumer spending in mainland China,” the UK company said.

Business in China declined by about 13 per cent in the last quarter, Chief Financial and Operating Officer Julie Brown said on a call with journalists. Currently around 40 per cent of Burberry’s network in China is impacted with stores closed and e-commerce disrupted. She said she expects a quick and pronounced recovery once the lockdowns end.

“It’s an amazing market and we look forward to being able to open the stores there,” she said.

Burberry gets less than 1 per cent of its sales from Russia, Brown said. Burberry is still paying staff there, according to the CFO.