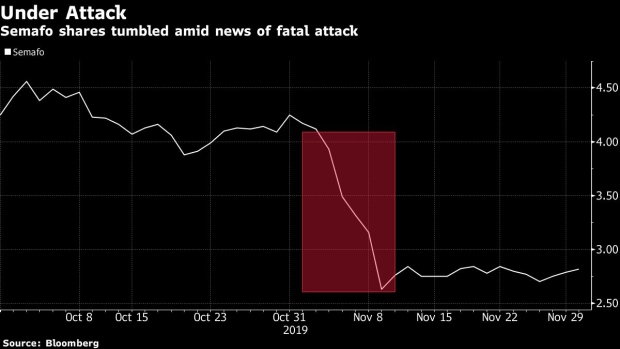 Burkina Faso is facing a challenge on how to protect its gold industry against a wave of jihadist violence that last month left scores of mining employees dead in a single attack.

While every mine has security arrangements in place, with sites generally safe, there’s no easy solution to protect access roads, Minister of Mines and Quarries Oumarou Idani said in a phone interview Monday.

“There are mines that have even built their own barracks and where we’ve sent security forces so those sites are secure,” Idani said. For access routes, “the security is linked to the overall security of the country. It is much more difficult.”

At least 39 people were killed in an Islamist militant attack on a bus convoy that was heading for Semafo Inc.’s Boungou operation in eastern Burkina Faso. The Nov. 6 raid came as several West African countries battle a widening insurgency and at a time when gold producers and prospectors are pouring money into the region as prices rally.

Prior to the attack, the government forecast gold output to reach 60 tons in 2019, up from almost 53 tons last year. Gold mining accounts for about 10% of gross domestic product in the nation that also produces cotton.

Perenti Global Ltd., whose African Mining Services unit is a contractor of Semafo, has withdrawn its employees from the Boungou site and will also stop supplying services at an operation of Nord Gold SE, according to a regulatory filing on Monday. AMS will continue to operate at three other sites which are located in a safer region in the center of the country, said Perenti.

“We believe it necessary to act swiftly and decisively in the wake of the attack,” Perenti Managing Director Mark Norwell said in the statement. The company’s stock have lost almost 16% since the raid near Boungou.

Burkina Faso will continue to attract investment because of the great potential of its gold resources, said Toussaint Bamouni, executive director of the Chamber of Mines.

The incident near Boungou “isn’t yet a reason for investors to become discouraged,” said Bamouni. While security adds to operational costs, “investors who know the potential of the country still have confidence the state can curb the threat.”

To contact the reporter on this story: Simon Gongo in Ouagadougou at sgongo@bloomberg.net

To contact the editors responsible for this story: Andre Janse van Vuuren at ajansevanvuu@bloomberg.net, Pauline Bax