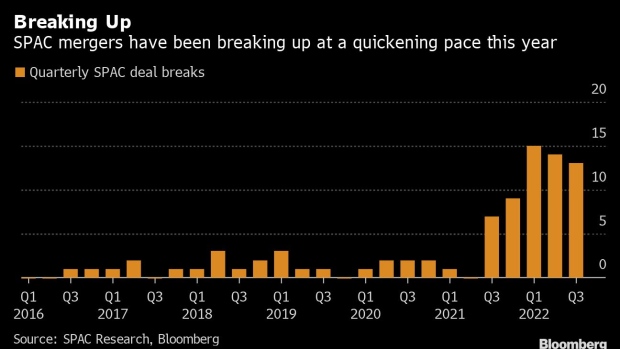 Meta stock information at the Nasdaq MarketSite in New York, U.S., on Thursday, Feb. 3, 2022. Meta Platforms Inc.'s stock collapsed as much as 26% on Thursday morning, its biggest drop ever, after Facebooks user base faltered last quarter, the first stagnation in the company's history. Photographer: Michael Nagle/Bloomberg , Bloomberg

(Bloomberg) -- A flurry of terminated deals is hitting the blank-check industry in another signal that the sector is crumbling.

At least four planned mergers between special-purpose acquisition companies and target firms looking to go public have been canceled since the market close on Friday, bringing the year’s tally to 42. The wave of breakups deals a blow to the industry that many believe has gone bust, leaving some investors sitting on paper losses.

The burst of terminated deals had a combined enterprise value of roughly $4.3 billion and included Bitcoin mining firm Prime Blockchain Inc., space logistics firm D-Orbit and electricity-market tech startup Voltus Inc. The choppy investing environment paired with a backlog of sponsorship teams chasing multiple deals are partly to blame for the mounting failures, according to some industry watchers.

SPACs are called blank checks because they raise cash in a public offering with the goal of buying a private business that hasn’t been identified yet. The industry has been battered by a glut of nearly 600 firms on the hunt for deals, as well as broader economic uncertainty and a looming regulatory crackdown.

The concerns have pushed 89 sponsors to withdraw plans to raise fresh capital for blank checks to the tune of $23 billion this year alone, data compiled by Bloomberg show.

The battered market has seen some activity, however, with more than 60 SPAC deals closing this year and another 113 heading toward completion, according to data compiled by SPAC Research. The 2022 class of de-SPACs is down a median 48% since going public, worse than the 38% loss in the Renaissance IPO ETF this year, Bloomberg data show.

More broadly, the teams that met their goal haven’t fared much better. Shares of firms that merged with SPACs have underperformed, with 82 of the roughly 385 trading below $2, Bloomberg data show. Most SPACs go public at $10 a share.