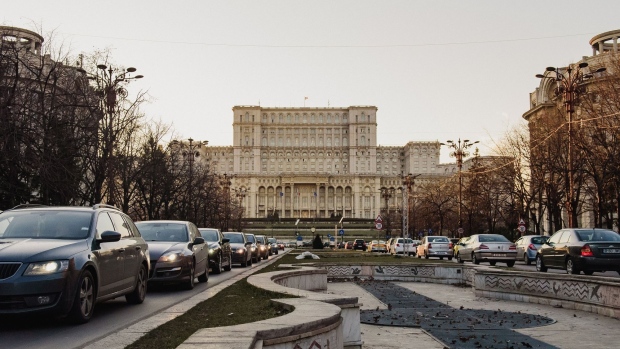 Automobiles idle in a traffic jam on Boulevard Unirii near the Palace of the Parliament building in Bucharest, Romania, on Thursday, Feb. 13, 2020. The weight of cars clogging Bucharest streets each day is robbing every driver of nine days and 11 hours of life per year, equivalent to the time it takes for Romania’s main auto exporter to make 15,600 cars. Photographer: Ioana Epure/Bloomberg , Bloomberg

(Bloomberg) -- The Romanian capital Bucharest was gridlocked for a second day as public transport workers continued to strike despite court rulings that the action was illegal amid a worsening pandemic.

Bus and tram drivers disregarded the court ruling and refused to start work on Friday, prompting citizens to form long queues at the subway at a time when Romania reported the highest number of new Covid-19 cases since the start of the pandemic. Prices on car-sharing applications have also surged significantly.

The workers are demanding higher wages and the resignation of the head of the public transport company, STB. In response, STB’s leader, Adrian Crit, urged union leaders to accept his request for dialog, saying he’s determined to make the company more efficient.