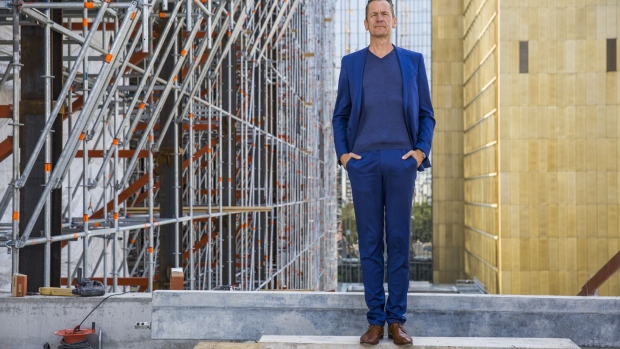 Front pages of German newspapers, Die Welt, Suddeutsche Zeitung and Bild report U.S. election coverage outside a news vendor in Frankfurt, Germany, on Wednesday, Nov. 4, 2020. Close contests in five key states mean the U.S. presidential election may not be decided for days, or longer, even as President Donald Trump falsely claimed victory over Democrat Joe Biden with millions of ballots still to be counted. , Bloomberg

(Bloomberg) -- A day after ousting the powerful editor-in-chief of Germany’s bestselling tabloid newspaper, the head of the Axel Springer publishing house sought to calm a newsroom more accustomed to setting the daily agenda than being the subject of public debate.

Mathias Doepfner strode into the offices of Bild Zeitung in Berlin mid-morning on Tuesday and laid out the reasons for dismissing Julian Reichelt. In his telling, keeping Reichelt became untenable after senior management found that he had failed to “clearly separate personal and professional matters” and that he had lied about his behavior.

Prior to Reichelt’s departure, the New York Times had published a lengthy article laying out his alleged misconduct, including promoting a junior employee with whom he was having a relationship.

Some members of the Bild editorial team listened to Doepfner in person, while others dialed in remotely, according to a person familiar with the setting. Speaking alongside Doepfner was Johannes Boie, Reichelt’s freshly-minted successor, who implored his team to focus on the task ahead.

“Let’s create headlines rather than be in the headlines,” Boie, 37, told the newsroom, according to Axel Springer.

With Reichelt gone, attention has shifted to Doepfner’s handling of the tumult in the publisher’s most important newsroom. Reichelt’s departure and the controversy surrounding the circumstances have dragged Springer into the public eye at a pivotal moment.

Reichelt did not respond to requests for comment. Axel Springer declined to comment on additional details of the meeting held by Doepfner in the newsroom.

The disgraced editor was instrumental in an ambitious push to expand the Bild brand from a print product to a new TV channel, where Reichelt made regular appearances. Doepfner has also been on an acquisition drive in recent years, most notably the $1 billion purchase of Politico announced just last month to cement Springer’s U.S. foothold.

With its newly acquired U.S. businesses, Springer’s corporate image has become the focus of global attention, a novel situation for a company with strong German roots. The international push has moved Springer into markets where allegations of male workplace misconduct aren’t necessarily viewed with the same nonchalance as they are by domestic boardrooms still filled with predominantly white, middle-aged men.

Springer itself is wary of this mismatch and says it wants to achieve at least 40% of female representation in its top management ranks, up from 25% now.

The publisher, through subsidiaries like Insider and Politico, competes with Bloomberg News in providing financial and political information.

While Springer was long a publicly listed company, its unique ownership structure granted protecting power to Friede Springer, the longtime majority owner and widow of namesake founder Axel Springer. She installed Doepfner two decades ago as CEO and gave him free reign to dramatically reshape the business. Bild has successfully transitioned to a paywall online model and last year topped 500k paying digital subscribers for the first time.

To reward him for his services, she gifted Doepfner large share packages that effectively turned the former journalist into a billionaire and made him one of Springer’s biggest stakeholders.

Today, Bild may remain Springer’s biggest brand, but the bulk of revenue comes in from classifieds and digital media offerings. It’s a transformation that speaks to the changing fortunes in the global media landscape, where traditional newsrooms have struggled as advertising and subscriptions dried up and readers migrated online or to new forums like Facebook Inc. and TikTok Inc.

Acknowledging that it needed a strong partner to shoulder the burden of the transition, Springer sold a stake to KKR & Co. in 2019, essentially talking the publisher private. As of May this year, KKR and The Canada Pension Plan Investment Board together controlled 48.5% of the company, while Doepfner and Friede Springer each owned about 22%.

Doepfner and KKR’s Henry Kravis have known each other for many years and trust each other. The private-equity company declined to comment on Reichelt’s dismissal and how it was handled at Springer.

Doepfner has overcome setbacks in the past, and his vast stake in Springer would make it difficult to challenge the authority of one of Germany’s longest-serving corporate leaders. Doepfner suffered a defeat in 2015 when he was forced to abandon a planned merger with German broadcaster ProSiebenSat.1 Media SE to create a more effective counterweight to Springer’s powerful rival Bertelsmann. The same year, he lost out to Japan’s Nikkei Group in a bidding war for the Financial Times.

For his part, Reichelt was controversial in more ways than one. Besides his alleged sexual advances toward younger female journalists, he had amplified Bild’s combative voice in editorials on topics from pandemic measures to the refugees inflow to the policies of the Green Party. That stance won him fans among colleagues and readers yearning for a counterweight to consensual journalism, while others derided Reichelt and Bild as needlessly divisive and antiquated, with an out-of-touch bunker mindset.

“While Axel Springer has successfully transformed into a digital media company, the culture that allowed Reichelt to stay in his position for so long without being challenged feels slightly outdated and doesn’t fit the global image the company wants to portray,” said Lutz Fruehbrodt, a journalism professor at the University of Applied Sciences Wuerzburg-Schweinfurt, who previously worked at the publisher’s Die Welt newspaper.

The affair could taint Axel Springer’s image in the U.S. and possibly have a detrimental effect on readership because compliance violations are seen much more critically in North America than in Germany, he said.

Axel Springer, which occupies an array of towering offices just off the former East-West border in Berlin, has long been suspicious of enemies at the gates, a corporate spirit dating back to 1972 when the Red Army Faction bombed a company high-rise in Hamburg, injuring 17 people. Reichelt was known to be driven through Berlin in an armored car.

Doepfner, a tall, lean figure, is more approachable by contrast and can be spotted dining in popular restaurants or getting a drink at a hotel bar. He’s also poured some of his wealth into art, including a white neo-classicist gallery next to the famed Bridge of Spies that connects Berlin with neighboring Potsdam.

Following their boss’s abrupt dismissal, some Bild journalists publicly thanked Reichelt for his leadership and for energizing the newspaper, appearing on Bild TV and Twitter to offer their support.

And even Doepfner’s own parting words carried a slight tone of regret, lauding Reichelt for his “outstanding job” as a journalist.

Springer would have liked to have continued the “cultural renewal” of Bild together with Reichelt, Doepfner said in a statement following Reichelt’s ouster.

“That is now no longer possible,” the CEO said.