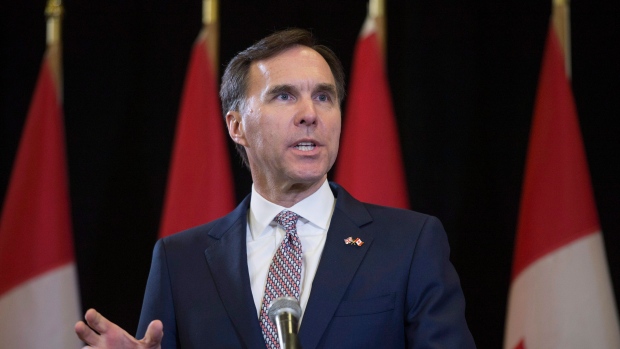 Bill Morneau speaks during a press conference at the media lock-up before tabling the federal budget , The Canadian Press/Justin Tang

A selection of Canadian business leaders are expressing skepticism Finance Minister Bill Morneau will be able to salvage his much-maligned tax reform plan. The planned changes, which include alterations to income sprinkling, passive investments through personal corporations and the conversion of regular income into capital gains, have garnered pitched criticism from many corners of the Canadian corporate world for a number of reasons, including the brief consultation period.

“The rushed timeframe — seventy-five days in the middle of summer — and the government’s repeated statements that all that was needed were some technical ‘tweaks’ demonstrated that they had little interest in listening to the people whose livelihoods were at stake,” Perrin Beatty, CEO of the Canadian Chamber of Commerce told BNN in an email. “Unfortunately, both the substance of the proposal and the ‘consultation’ process were flawed from the outset. Despite the government’s assertions that they didn’t intend to inflict serious damage on legitimate small businesses, hundreds of tax practitioners across Canada warned that these measures would inflict serious harm.”

Beatty said the Canadian Chamber will assess the government’s revisions when they see them, but in the meantime, they are advising stakeholders to treat the situation as “buyer beware.”

Other players in the Canadian business landscape are less patient. In an interview on BNN, Moodys Gartner Tax Law Director Kim Moody said he has little hope the situation can be salvaged to the satisfaction of both the government and private enterprise.

“People like me, and the tax community in general, would like to see these proposals withdrawn completely under all three pillars,” he said. “Let’s start again: what are you really trying to get at here? What’s the mischief that’s ultimately on the table?”

A prominent member of Canada’s business community was similarly grim on the tax plan’s prospects and Morneau’s ability to curb unintended consequences.  In an email to BNN, Prairie Merchant Chairman Brett Wilson, who has been a vocal opponent to the new measures, said Morneau may simply be unable to bridge the gap between the government’s stated objectives and the feedback from the business community. That failure could have a disastrous effect for the Liberal’s electoral prospects, he said.

“I am deeply concerned that the gap between Bill’s statement ‘we will get them’ and his new promise to deal with unintended consequences will not be reconcilable,” he said. “Thus we will need a new government.”