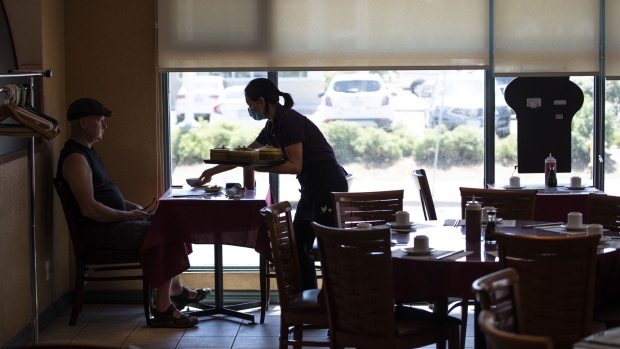 A server wearing a protective mask delivers a customer's order at a restaurant on its first day of reopening and the first day of indoor dining in Ottawa, Ontario, Canada, on Friday, July 17, 2020. Twenty-four districts, including Ottawa and Waterloo, are moving into the final stage of the three-part reopening plan as Covid-19 infections continue to drop. , Bloomberg

OTTAWA - The federal Liberals threw a credit lifeline to small businesses on the eve of rent coming due, extending a loan program as new figures showed a rent-relief effort is going to fall well short of expectations.

A report Monday from the parliamentary budget officer said the program aiming to provide rent relief to small and medium-sized businesses will cost $931 million after it was extended through to August.

The updated spending projections still put the program on a track to provide less help than the nearly $3 billion the Liberals had budgeted.

The program provides forgivable loans that cover half of rent for eligible small businesses, and also requires landlords to waive a further one-quarter of what they'd otherwise be owed.

Property owners have to apply for the help, and the Liberals have for months repeatedly asked landlords to use the aid - a request Finance Minister Chrystia Freeland reiterated Monday.

The Canadian Federation of Independent Business has asked the government to allow tenants to directly apply for help, or make changes to a small-business loan program so that more of the outstanding amount could be forgiven if paid back on time.

The group's executive vice-president warned some companies are ready to close with September rent due on Tuesday and hoped that Freeland, newly minted in the finance portfolio, would make amendments.

“You qualify for the support, except that someone outside of your business and government have to nod their head and agree to it,” Laura Jones said in an interview Monday.

“It's just so fundamentally unfair that I have a hard time believing that anyone with common sense and smarts wouldn't see that unfairness and want to fix this.”

“The program's getting a fraction of expected use, not because small businesses are thriving, but because those that need the help can't access it,” he said in a statement.

Speaking in Toronto, Freeland said the government would adapt aid programs as needed, and committed to listening and supporting small businesses to help them bridge tough times.

While many have reopened as restriction relax, their revenues are still low even if fixed costs like rent remain at 100 per cent, which is why many had looked to the Liberals to make a change to the program by now.

“There are many businesses out there who are anxiously awaiting for a response from us,” said Small Business Minister Mary Ng, seated alongside Freeland at the phone-in press conference, “and I just want to assure you, we're absolutely working on that.”

Jenifer Bartman, a Winnipeg-based business consultant, said some landlords may not be applying for the program because they feel other supports may be able to help companies afford their rent.

Others, she said, may be worried about their own loans and mortgages given the economic uncertainty.

But without getting help to companies, some may opt not to renew their leases, close down and eliminate jobs, said Bartman.

“That's what I see as the real danger,” she said. “Companies go out of business ... then the spaces are empty, and landlords try to fill them in what could be the worst of times.”

Aiming to help businesses in a different way, the Liberals on Monday announced an extension of the Canada Emergency Business Account until the end of October.

Freeland also said that the government is working with financial institutions to expand eligibility to companies that have been shut out of the program, including those who use personal rather than business bank accounts.

The government had said in mid-May that it was working to address that particular issue.

Freeland said details about eligibility changes will be released in the coming days, including a new process to open a business account.

“Small businesses can't operate on 'soon' and they definitely can't plan for a future in such uncertain terms,” he said.

The government said the business loan program has provided more than $29 billion in credit through more than 730,000 loans.

Eligible businesses can receive interest-free loans of up to $40,000 through the program, and have one-quarter of the outstanding amount forgiven if the balance is repaid by Dec. 31, 2022.