Canadian consumers and businesses are entering the second half of the year brimming with confidence about the nation’s economic prospects, a signal of what could be an imminent boom.

A gauge of business sentiment released by the Bank of Canada rose to record levels as an accelerating vaccine rollout bolsters confidence in the recovery. Separate surveys of consumer confidence from the central bank and Bloomberg News found optimism at or near all-time highs. 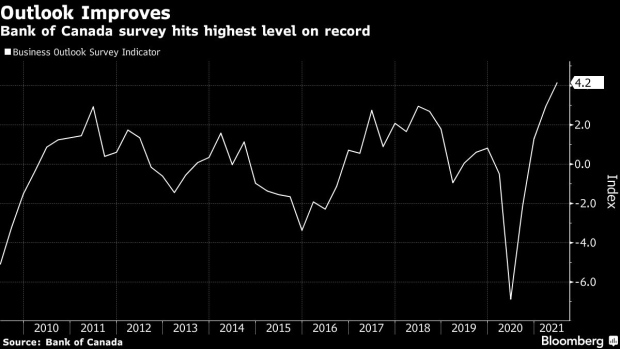 The numbers will stoke expectations among economists and policy makers that households and business will be in a spending mood as pandemic restrictions are lifted, particularly because they have a massive stock of savings accumulated during the crisis. The results also increase the likelihood the Bank of Canada will continue paring back its aggressive monetary policy stance at its July 14 policy decision.

The bank said there’s evidence of a nascent recovery in sectors that have struggled up to now -- the vast majority of firms say pandemic-related uncertainty is behind them. Not one company surveyed reported signs of a deterioration in expected demand.

“To me, it’s just how broad-based the optimism is, whether it’s hiring plans or spending or expectation for future sales. It’s quite impressive,” Doug Porter, chief economist at Bank of Montreal, said by phone. “It says a lot that businesses are so upbeat.”

The bank’s composite gauge of business sentiment rose to 4.2 in the second quarter, the highest score in data going back to 2003. That’s up from 3 in the first quarter and as low as negative 6.9 during the height of the pandemic last year.

“Firms tied to high-contact services still face challenges but are becoming more confident that sales will pick up as vaccination rates rise,” the central bank said in the summary of its findings. “This suggests an important broadening in the recovery ahead.”

The interviews in the Bank of Canada business outlook survey were conducted from May 11 to 28, while parts of Canada were still in the middle of lockdowns to contain a third wave of the virus.

The central bank is among the first from advanced economies to shift to a less expansionary policy, having already cut its purchases of Canadian government bonds to $3 billion (US$2.4 billion) weekly from a peak of $5 billion last year.

Analysts anticipate that will come down to $2 billion per week in next week’s policy decision, before eventually falling to a weekly pace of about $1 billion by early next year.

In addition to its bond tapering, the market has priced in at least one interest rate hike by this time next year. To keep the economy flush with cash, the Bank of Canada has kept its benchmark interest rate at a record low of 0.25 per cent and purchased hundreds of billions of Canadian government bonds.

Pressure to slow down stimulus has comes as falling case numbers allow governments to finally reopen restaurants and bars after months of closures. The federal government has also begun to gradually ease border restrictions.

Canadian households have an estimated $220 billion (US$178 billion) in excess savings accumulated during the pandemic, according to a report on Friday from Bank of Montreal. That’s on top of wealth effects of rising home values that have increased net worth by about $2 trillion.

The Bloomberg Nanos Canadian Confidence Index jumped to 66.4 last week, the highest reading since surveys began in 2008. The gauge has historically averaged around 56 and had never broken the 63 barrier until recently.

A separate survey of consumers released on Monday by the Bank of Canada found spending expectations near a record, reflecting Canadians desire to unleash pent-up demand once restrictions ease.

Canada’s expansion is seen accelerating to an annualized pace of 9.1 per cent in the third quarter, with a 6 per cent gain in the final three months of 2021, according to a Bloomberg News survey of economists earlier this month.

The strong economic rebound coincides with rising inflationary expectations, a potential concern going forward for policy makers. Some 86 per cent of firms surveyed expect inflation above the Bank of Canada’s 2 per cent target over the next two years, one of the highest levels ever recorded. More than one-third see inflation above 3 per cent.