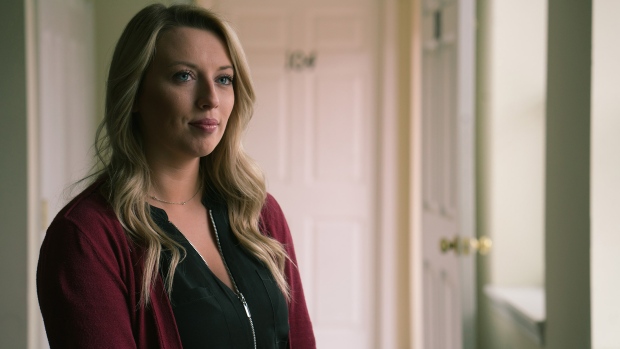 (Bloomberg Businessweek) -- To pay for college, Amy Wroblewski sold a piece of her future. Every month, for eight-and-a-half years, she must turn over a set percentage of her salary to investors. Today, about a year after graduation, Wroblewski makes US$50,000 a year as a higher education recruiter in Winchester, Va. So the cut comes to US$279 a month, less than her car payment.

If the 23-year-old becomes a star in her field, she could pay twice as much. If she loses her job, she won’t have to pay anything, and investors will be out of luck until she finds work.

Wroblewski struck this unusual deal as an undergraduate at public Purdue University in West Lafayette, Ind. To fund part of the cost of her degree in strategy and organizational management, she sidestepped the common source of money, a student loan. Instead, she agreed to hand over part of her future earnings through a new kind of financial instrument called an income-sharing agreement, or ISA. In a sense, financiers are transforming student debtors into stock investments, with much of the same risk and, ideally, return.

In Wall Street terms, Wroblewski, a first-generation college student, is more small-company stock than Microsoft. Her mother works as a waitress; her father, as a quality control inspector in a car dealership’s body shop. With a strong work ethic, Wroblewski always held down at least two part-time jobs in school, working as a Purdue teaching assistant, a Target cashier, and an Amazon seasonal worker. Showing potential for leadership—not to mention earnings—she rose to vice president of Delta Sigma Pi, a business fraternity.

Those qualities impressed a company called Vemo Education, which vets students at Purdue and a handful of other schools on behalf of potential investors. More important, perhaps, Wroblewski believes in herself and her ability to make good on the contract. “Even with all my other loans, I knew I could make it work,” says Wroblewski.

Americans owe US$1.5 trillion in higher education debt, a burden that weighs down their dreams and the U.S. economy. The Federal Reserve says millennials are now less likely to buy homes than young people were in 2005, and even senior citizens find themselves still making payments on their student loans. Wall Street sees the crisis as an opportunity. College graduates on average earn US$1 million more over their lifetimes. Investors could capture some of that wage premium for themselves.

“I envision a whole new equity market for higher education in the next five years where today there’s only debt,” says Chuck Trafton, who runs hedge fund FlowPoint Capital Partners LP, which has invested in ISAs, including Purdue’s. ISA experts say they have fielded calls from some of the world's largest investment managers that are considering investing in the contracts. And Tony James, executive vice chairman of money manager Blackstone Group LP, formed the Education Finance Institute to help schools study and develop ISAs.

For now, the market for income-sharing agreements can be measured in the tens of millions, a tiny sum compared with the US$170 billion in outstanding asset-backed securities created from student loans. Only some schools let outside investment firms buy a stake in students. Others seek out individual donors, mostly wealthy alumni, or use money from their own endowments.

Along with Purdue, which started its program in 2016, some smaller private schools such as Lackawanna College in Scranton, Pa., and Norwich University in Vermont are offering ISAs. The University of Utah recently announced a pilot plan.

ISAs raise all kinds of questions. How many students will lose their jobs and be unable to pay? How much should Wall Street demand as compensation for the risk? Investors typically ask for a smaller slice from students with more lucrative majors. At Purdue, for example, English majors borrowing US$10,000 pay 4.52 per cent of their future income over nearly 10 years; chemical engineers, 2.57 per cent in a bit over seven years.

Financial firms and for-profit colleges have been known to prey on college students’ financial naiveté to sell them high-priced private student loans, rather than steer them toward more favourable government-backed ones. While schools offering ISAs say they will offer them only after government loans with the most favorable terms are exhausted, some students may end up again with regrets.

“There’s a level of enthusiasm that’s overstated,” says Julie Margetta Morgan, a fellow who studies higher education at the Roosevelt Institute, a think tank focused on reducing income inequality. “It’s pretty darn near impossible to say whether an ISA is better or worse for an individual.” Morgan dislikes that ISAs require arbitration, which means students give up their right to sue in court.

The last big ISA experiment—at Yale University in the 1970s—ended up as a cautionary tale. Yale pooled all borrowers, and they owed the school a percentage of their incomes for 35 years, or until everyone paid back what they owed. The idea was that graduates who ended up with high-paying jobs in finance would subsidize those who chose public service.

But many students defaulted, leaving the remaining borrowers on the hook longer than they’d anticipated. Other wealthier students exited the pools via large one-time buyout payments. The remaining students tended to be lower-income. Some stopped paying altogether. Yale ultimately bailed out the borrowers, winding down the whole program in 2001.

Juan Leon, who sells business jets for Dassault Aviation SA, graduated from Yale in 1974 with a degree in urban studies. He borrowed US$1,500 through the college’s “Tuition Postponement Option.” By the late 1990s, he’d paid back US$8,000. “We didn’t read the fine print,” Leon says. “It was quite, quite onerous.”

Students have more protection under newer plans. Purdue, for example, caps total payments at 2.5 times what a student borrowed, so the most successful don’t feel gouged. And students making less than US$20,000 a year won’t be charged at all, as long as they are working full time or seeking work. Those who are working part time or not seeking work will only have their payments deferred, which means that they’ll owe for a longer period of time. 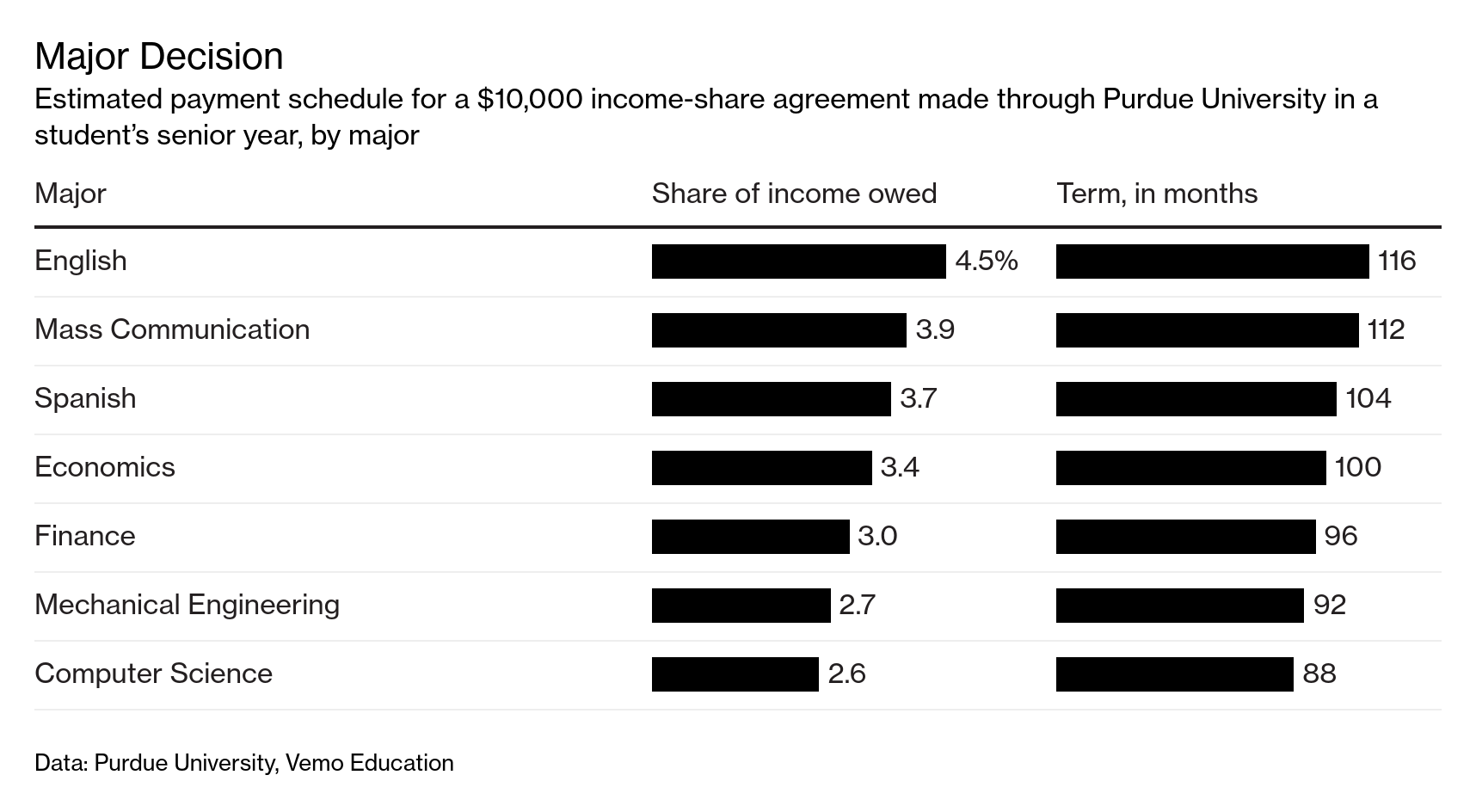 Purdue has arranged more than 700 contracts worth US$9.5 million and closed two investment funds totaling US$17 million. David Cooper, Purdue’s chief investment officer, helped to develop the program and pitch it to investors after almost a decade of overseeing investments for Indiana’s retirement system. He says the funds are drawing more interest now that the oldest contracts have over 20 months of repayment data. “We feel like we’ve got the pricing for the students at a pretty good spot,” Cooper says. “At the same time, it’s a reasonable return for the investors.”

Purdue’s early funds attracted investments from wealthy individuals, as well as nonprofit Strada Education Network and INvestEd, a nonprofit lender and financial literacy organization in Indiana. Cooper says ISAs may make most sense for socially conscious investors, but he points out that even funds seeking lofty profits might one day be interested if they can juice returns with leverage.

Charlotte Hebert, 23, who graduated from Purdue in 2017, has mixed feelings about the US$27,000 she took out from an ISA to pay for her senior-year costs. A professional writing major, she’s required to shell out 10 per cent of her income for the term of the deal. That’s about 2.5 percentage points more than an engineer would pay. The daughter of a teacher and a nurse, she makes about US$38,000 a year as a technical writer for an engineering firm in Lafayette, Ind.

She pays investors US$312 a month. “I don’t think it’s the perfect solution,” Hebert says. “I am of the opinion that in a society where most of its workers need a college education, nobody should be paying this much to be what is considered a functional member of society.”