(Bloomberg Businessweek) -- The world needs a more precise way to describe wealth. “Millionaire” is too broad, covering everyone from random pikers with a scant US$1 million in net worth all the way up to people just shy of billionaire status. “Billionaire” has the same problem. There’s a huge difference between your local anonymous rich person who just clears the US$1 billion mark and, say, Jeffrey Bezos or Bill Gates. The language down the scale of wealth is even more impoverished. “Thousandaire” isn’t even an accepted word, let alone “hundredaire.” Yet that’s the net worth space where most of us live.

We have a solution. It’s a scale of net worth based on scientific notation, or powers of 10, which you (should have) learned in fifth grade. One million is 10 to the sixth power, so a basic millionaire is a 6 on our scale. Bezos and Gates are 11s. At the poor end of the scale, someone with $1 in net worth is a zero, and someone with 1/10th of a dollar (a dime) to his or her name is a -1.

Technically anyone with liabilities exceeding assets is undefined on this scale, because there’s no such thing as a logarithm of a negative number. But for simplicity, we’ll throw them into -2, which is for people with one to nine pennies of net worth. 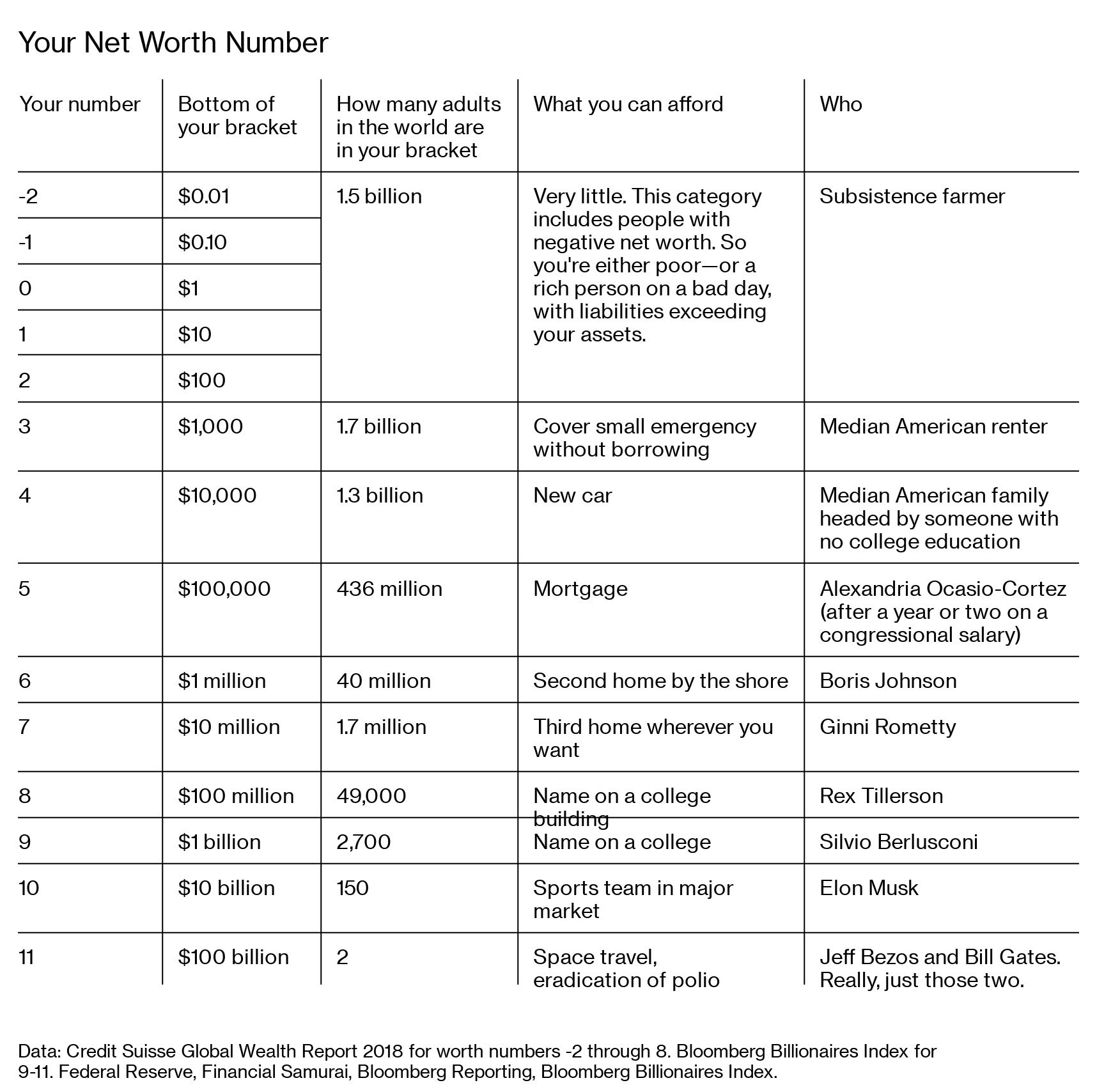 As with the seismic scale for earthquakes, this net worth scale squeezes an enormous amount of variation into a compact set of numbers. The poorest of the poor, at -2, are only 13 units away from the richest of the rich, the handful of 11s who have unimaginable wealth and power. (That could be a problem if it makes the gap between poor and rich appear easily bridgeable, which of course it isn’t.)

Take a minute and figure out where you stand on the scale. We estimated the number of people in each group, using data from the Bloomberg Billionaires Index for numbers 9 through 11 and the Credit Suisse Global Wealth Report for all the rest.

The numbers of people in each group are admittedly rough. For example, Bloomberg estimates that there are more than 2,800 adult billionaires (numbers 9 through 11, combined) in the world, while Credit Suisse estimates there are about 1,600. The estimates for the lower levels are squishier. Credit Suisse doesn’t try to break things down for numbers below 3, simply estimating that about 1.5 billion adults worldwide have net worth under US$1,000.

It’s best to view the numbers of people in the lower brackets as ballpark figures, subject to change as more data come in. The academics who put together the World Inequality Report 2018 edition write, “We want to be very clear about this: available data sources make it impossible at this stage to properly estimate the level and evolution of the global distribution of wealth.”

The purchasing power figures are likewise intended to be illustrative, not hard data. For example, we say a 4 can afford a new car. The point isn’t that new cars cost US$10,000 to US$99,999 (although that’s the right order of magnitude). It’s that you probably need to be a 4 to afford a new car. Although, of course, there are 1s, 2s, and 3s who will stretch to buy one.

It’s a bit appalling that disparities in wealth have gotten so big that we need logarithms to describe them. But that’s the world we live in.