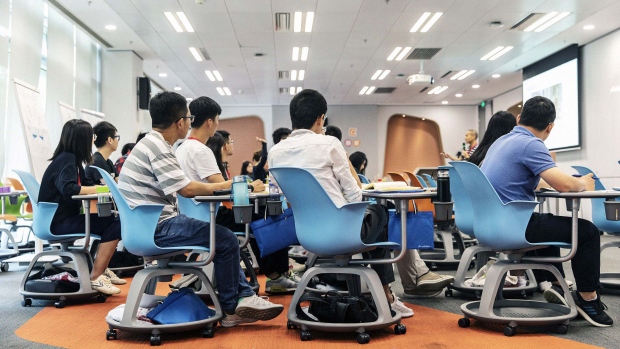 (Bloomberg Businessweek) -- Step through the gates of Huawei Technologies Co.’s sprawling campus in southern China, and you’ll see a workforce in frenetic motion. Neon-green minivans ferry workers between offices around the clock. Fluorescent lights burn through the night. Employee canteens are open until near midnight.

China’s largest technology company has thrived on what some employees and outsiders call its “wolf culture.” The take-no-prisoners approach is amplified now that Huawei is at war with President Trump, fighting back against his efforts to cut off its markets and customers and deprive it of critical technology. On May 17, the U.S. Department of Commerce added Huawei to a blacklist of companies that blocks it from buying American software and components it needs to make its products.

Huawei has assigned as many as 10,000 of its developers to work across three shifts a day in offices in Shanghai, Shenzhen, and Xi’an to try to eliminate the need for American software and circuitry, according to people familiar with the matter. From janitors to drivers, everyone has been drafted into the struggle and told to brace for escalating political and market pressure. Huawei has declined to comment beyond saying it’s had contingency plans in place for just such an occasion.

Engineers in some groups haven’t gone home for several days, one person says, asking not to be identified when discussing internal matters. Among other items, the person says, the developers are making base-station antennas, a component that U.S. companies such as Rogers Corp. manufacture for a market they dominate, and tweaking the design of entire 4G base stations, which compete toe-to-toe with products from Ericsson AB and Nokia Corp.

“It’s not a question about if we can win—we have to win,” says a Huawei engineer, the head of a small research and development team responsible for communication chips who requested anonymity because employees have been warned not to speak to the press. “This is a war about China having an independent communications technology industry.” On an online employee forum, the following message was posted: “Warriors in golden armor shall never return home until they defeat Trump from America.”

The U.S. government’s actions could throttle what has been a period of tremendous growth for Huawei. The company is the world’s top provider of networking gear and the No. 2 smartphone vendor after Samsung Electronics Co. The U.S. ban is unsettling chipmakers from the U.S. to Europe as the global supply chain comes under threat. It could also disrupt the rollout worldwide of 5G wireless, undermining a standard that will power everything from autonomous cars to robot surgery.

Trump has said the restrictions are a necessary response to Huawei helping Beijing spy on other governments. The company for years has been accused of—and sued for—stealing intellectual property from several big companies, including Cisco Systems Inc. and T-Mobile; Huawei has denied all charges. “We are ahead of the U.S. If we were behind, there would be no need for Trump to strenuously attack us,” Huawei founder Ren Zhengfei told Bloomberg Television on May 24.

Huawei brass watched the Commerce Department bring another Chinese company, ZTE Corp., to its knees in 2018, noting how Washington forced ZTE to revamp management, pay a 10-figure fine, and give U.S. observers access to its inner workings. They swore then that, when the time came, Huawei would be prepared. “We are on the right side of history,” the company wrote in an internal memo after the ban was announced. “After every storm, there is a rainbow. We expect every one of you to stay confident, remain dedicated, and diligently fulfill your duties.”

Huawei is said to have stockpiled enough chips and other vital components to keep its business running for at least three months, according to people familiar with the matter. Some of its 180,000 employees remain optimistic that Beijing will resolve its dispute with Washington. Others are confident the Chinese government will step in with either capital or policy changes to prop up the company.

On May 17, the same day Huawei was blacklisted, China announced a tax waiver for local chip design and software companies. That means HiSilicon, the secretive chipmaking division that’s leading Huawei’s efforts to wean itself off American semiconductors, won’t be required to pay any taxes over the next two years.

Still, anxiety is creeping through Huawei offices from Tokyo to Sydney, employees say. “We can’t deny that it’s had a negative impact, as bad news around Huawei is reported every day,” one of them says. “But employees in Japan are rallying, and we’re just trying to keep working as usual. Some of our customers are even trying to cheer us up.”

As Huawei marshals its troops, the U.S. continues to exhort governments around the world to shun its equipment. Australia and New Zealand have banned its gear, and Japan has effectively done so, while others, including the U.K., are weighing their options. Trump has said the restrictions on the company could be lifted as part of a trade deal with China, but negotiations have stalled. “The fundamental question here is, is this a negotiating lever as part of a trade deal?” says Chris Lane, a Sanford C. Bernstein analyst. “If the ban goes on a long time, Huawei will lose a lot of market share.