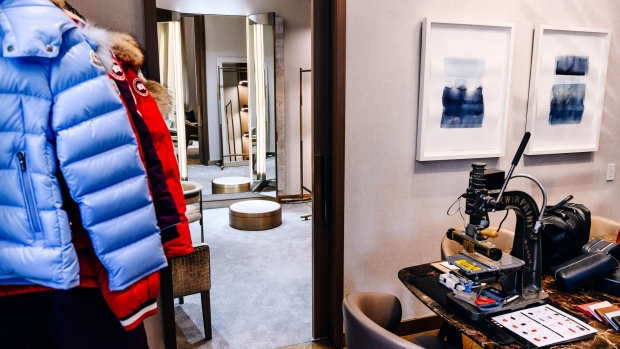 (Bloomberg Businessweek) -- The gatekeepers of luxury retail have long tried to convince customers that personal shopping isn’t just for those who can afford to drop $10,000 on a handbag. After all, they’re more likely to buy something and spend more on that visit, on average, than traditional buyers. Shoppers have resisted for that same reason. Its reputation as a haughty, gilded oasis where you’re handed Champagne and hidden from the commoners, while a stylist pulls a carefully curated set of items for you to try on, hasn’t helped.

“We’ve spent a generation trying to get more people to engage with us on private shopping,” says Marc Metrick, president and chief executive officer of Saks Fifth Avenue.

But Metrick says the pandemic has forever changed that dynamic and predicts this level of attention is a scalable option now. More customers are using the service, including those who may not have in the past because of the misconception that they had to spend a ton to do so.

Retailers are trying to take advantage of this newfound willingness, both on- and offline. Signet Jewelers Ltd., owner of Kay Jewelers, Jared, and Zales, hurried out a one-on-one virtual platform last year that allowed customers to book a video chat with an associate, who offers advice and provides the hand-holding expected when buying such big-ticket items as engagement rings and diamond necklaces. CEO Gina Drosos says these consultations will become mainstays after the pandemic and could change her workforce as staffers shift between guiding shoppers online and in stores.

At Neiman Marcus Group Inc., CEO Geoffroy van Raemdonck is encouraging private interactions as well. Fresh out of bankruptcy, the retail chain had 65 in-store and digital sellers before the pandemic but now plans to increase that number to 200 over the next year. “We are a relationship business,” Van Raemdonck says. “Now it’s about creating that role for customers who want to be digital.”

During pandemic lockdowns, people have gotten more used to others helping them make purchases for even basic items. Walmart Inc. more than doubled its number of personal shoppers, to almost 160,000, this past holiday season to grab groceries or stocking stuffers for curbside pickup and delivery.

Buyers having their carts curated for them is the next step. Saks, which is owned by Canadian retail group Hudson’s Bay Co., started its personal shopping department in Boston in the 1980s, then took the concept to other locations. Of the 40 Saks stores, 31 now have these clubs. There are no minimum spends or fees; the only costs are the actual merchandise, alterations, and shipping. In New York, the flagship has almost 13,000 square feet and 33 private rooms devoted to personal shopping. The most recent expansion in 2016 was part of a $250 million renovation.

Many of the 30 consultants on staff have been trekking to clients’ homes in the Hamptons and Connecticut, with a fitter tagging along. For the highest-end customers, they’ll travel all over the world together, going to fashion shows and meeting with designers and tailors.

That’s mostly virtual now: They send a bottle of Champagne and have everyone hop on Zoom. Lisa Bruni Vene, managing director for luxury services at Saks, who’s worked at the retailer for more than two decades, says business has doubled in the past 10 years. She’s doing a lot more virtual selling these days, though the physical suites, like little versions of living rooms you’d find at a five-star hotel, have also been filling up.

“Four out of five times, a new appointment is for special occasions, but not in this environment,” Bruni Vene says. “The majority of our business comes from clients doing new wardrobes.”

But the retailer’s average shoppers aren’t billionaires or celebrities, though it gets its fair share. They’re fashion-conscious regulars or businesspeople looking for help and guidance. These customers prefer it because of that personal advice and direction, not to mention the sheer convenience of getting someone else to arrange your shopping for you, rather than searching for the things you like on your own.

“Like any luxury that people have, they don’t think they need it, and then once they have it, they can’t live without it,” Metrick says. “They’re never going to go back.”