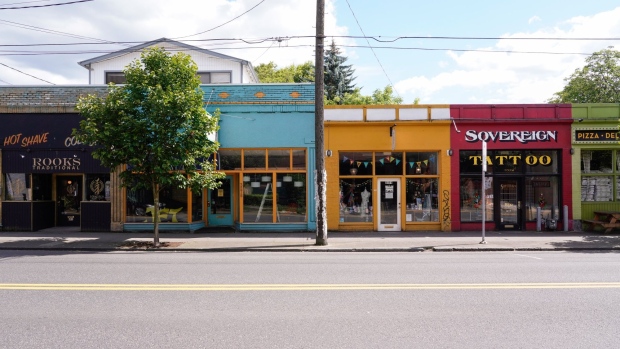 Small businesses stands temporarily closed in Portland, Oregon, U.S., on Wednesday, June 17, 2020. Oregon's Multnomah County, where much of Portland lies, was set to enter Phase 1 of reopening on June 12. But Governor Kate Brown announced the night before that the reopening would be delayed. , Bloomberg

From late March to mid-July, more than 420,000 small businesses closed permanently, according to a Brookings Institution report released in mid-September.  That’s more than typically shutter in an entire year. “We look set to lose at least as many small businesses in this year alone as over the four-year period from peak to trough during the Great Recession,” the report warns.

These enterprises are fragile: “47 per cent would have to rely on personal funds to fill a 2-month revenue gap, 88 per cent rely on their personal credit score, and only 44 per cent have had a bank loan in the past 5 years,” the report’s author, Steven Hamilton, tweeted the day it was released. “I worry about the destruction of intangible capital—like links between businesses and their workers, suppliers and customers—when hundreds of thousands of otherwise-viable businesses fail. Big businesses reorganize; small businesses dissolve. There are big macro effects too,” he wrote in another tweet.

A bit of hopeful news is that while business formations declined in the spring, they are on track to outpace recent years, according to a separate paper the think tank released the same day. The Census Bureau shows formations were up by about 4.8 per cent in the second quarter over the first quarter. A big question is whether enough people will launch enough new businesses to offset the closed ones. Another unknown: Will lawmakers and others do enough to prevent more closures?

A big question is whether enough people will launch enough new businesses to offset the closed ones. In more stable times, there is significant turnover, with the net stock of small businesses growing by about 25,000 annually, according to the report.

Another unknown: will lawmakers and others do enough to prevent more closures. House Speaker Nancy Pelosi said President Donald Trump’s COVID-19 diagnosis might change the tenor of the stimulus talks by emphasizing the seriousness of the pandemic, Bloomberg News reported on Oct. 2.

Many struggling entrepreneurs are trying to reinvent their businesses to better address life during a pandemic. “The challenge here is people don’t know how long or deep this is going to go,” says Luz Urrutia, who was a banker for about two decades before becoming the chief executive officer of Opportunity Fund, the nation’s leading nonprofit microlender to small businesses. A survey published in September by JustBusiness, an advice site from online loan marketplace Fundera, of more than 400 entrepreneurs launching new ventures showed restaurants, bars, retail stores, and music venues among the top industries for respondents. About half indicated the new venture will be their first.

Businessweek is profiling a handful of entrepreneurs who have recently launched new businesses, to share advice and information from their experiences. Up first: California Family Bonds Selling Pandemic Supplies