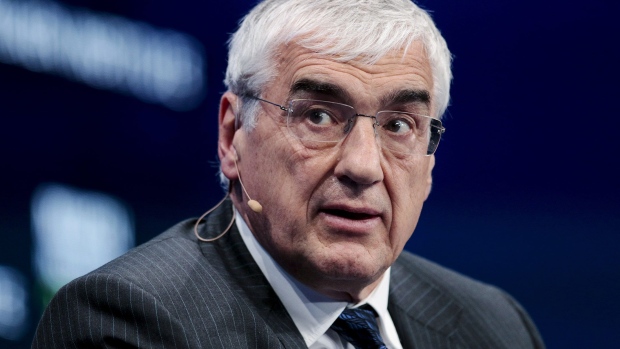 (Bloomberg Businessweek) -- Every morning at 11:30, hedge fund manager Michael Hintze rallies his troops at the office of CQS in London. Portfolio managers and analysts stand at a podium to offer their assessment of whether they’ll make or lose money because of unfolding global events. Traders in New York and Hong Kong are linked up, and the meeting is broadcast around the firm. More serious matters are handled behind the podium, in CQS’s “situation room.” The walls here are crowded with charts, and screens display anything from a real-time cyberattack unfolding somewhere in the world to Gulf shipping to various Twitter feeds. Another wall has TV channels featuring Al Jazeera, China’s CCTV, and other networks.

In an age of quantitative investing, where billions of dollars are run by black-box algorithms making split-second trades, Hintze’s approach seems almost old-fashioned. So it was a surprise when an interview with him and his lieutenant, Xavier Rolet, the former CEO of London Stock Exchange, turned to quantum computing.

Quantum computing is a superfast technology that’s still in labs, where the likes of Alphabet Inc.’s Google and International Business Machines Corp. are still trying to figure it out. There are no practical applications yet, but for anyone running money, it’s on the horizon as an opportunity—and a threat. “We’re trying to get a little bit ahead,” says Hintze, whose wealth is estimated to be at least US$1.6 billion by the Bloomberg Billionaires Index. “You need to be mindful of the tools you have, the ground you’re fighting over, and, thirdly, who you’re fighting against.” 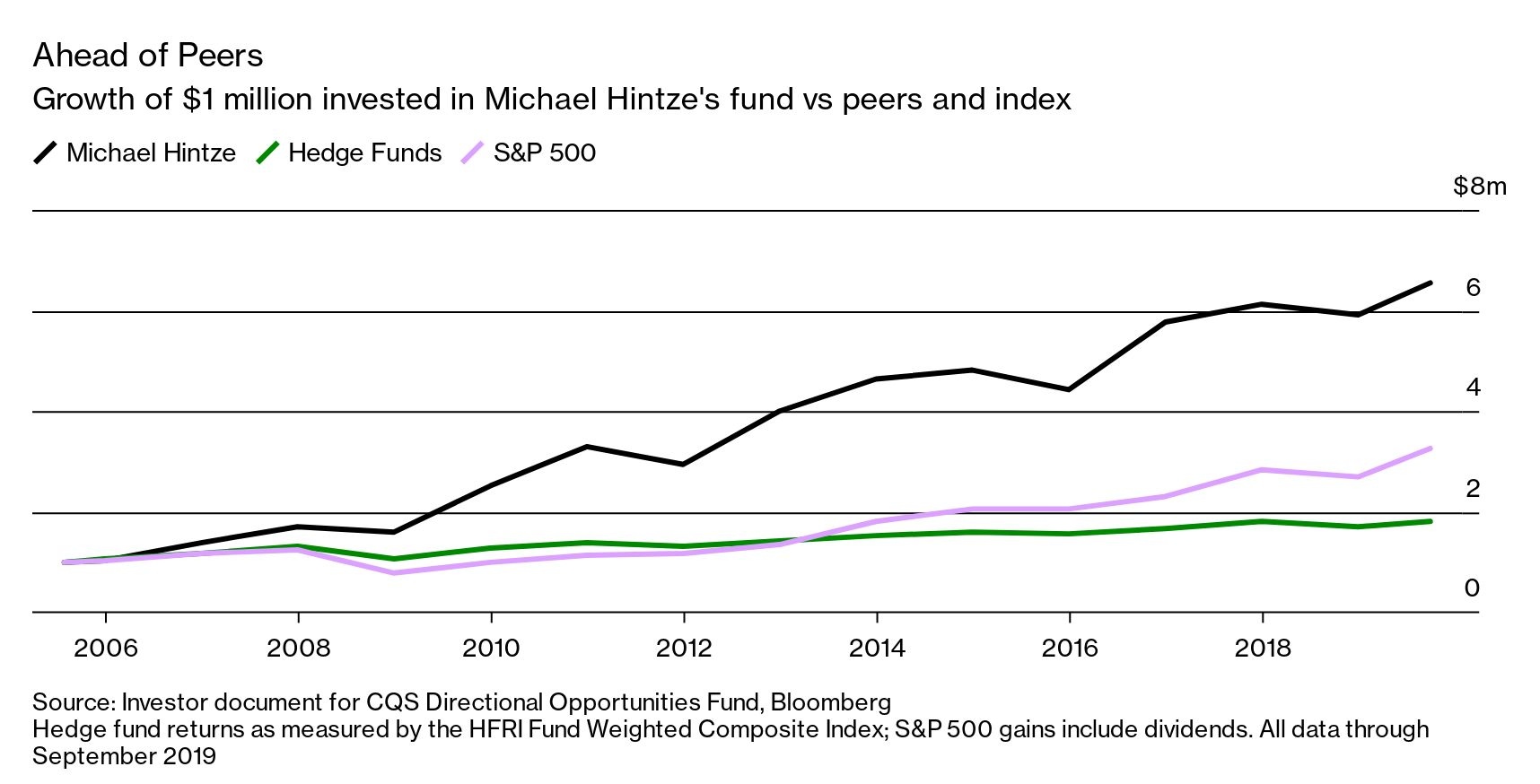 Hintze and Rolet are both quick to dismiss any plan to start funds run by algorithms. But they say that CQS is working with a startup to develop a quantum chip to help the firm optimize portfolios and execute hedging strategies. More immediately, CQS hired Ahmad Deek from OppenheimerFunds to be the firms’s head of data science.

With about $19 billion in assets under management, CQS has so far done just fine relying on flesh-and-blood analysts and managers who use fundamental research to pick securities. It’s one of the largest hedge fund firms in Europe. And at a time when hedge funds are facing investor revolts and outflows for not generating enough returns to justify their high fees, Hintze’s $3.1 billion multi-strategy CQS Directional Opportunities Fund has returned more than 550 per cent since its launch in August 2005, according to an investor letter. That’s double the gain in S&P 500 Index during the period and almost seven times the average hedge fund return. 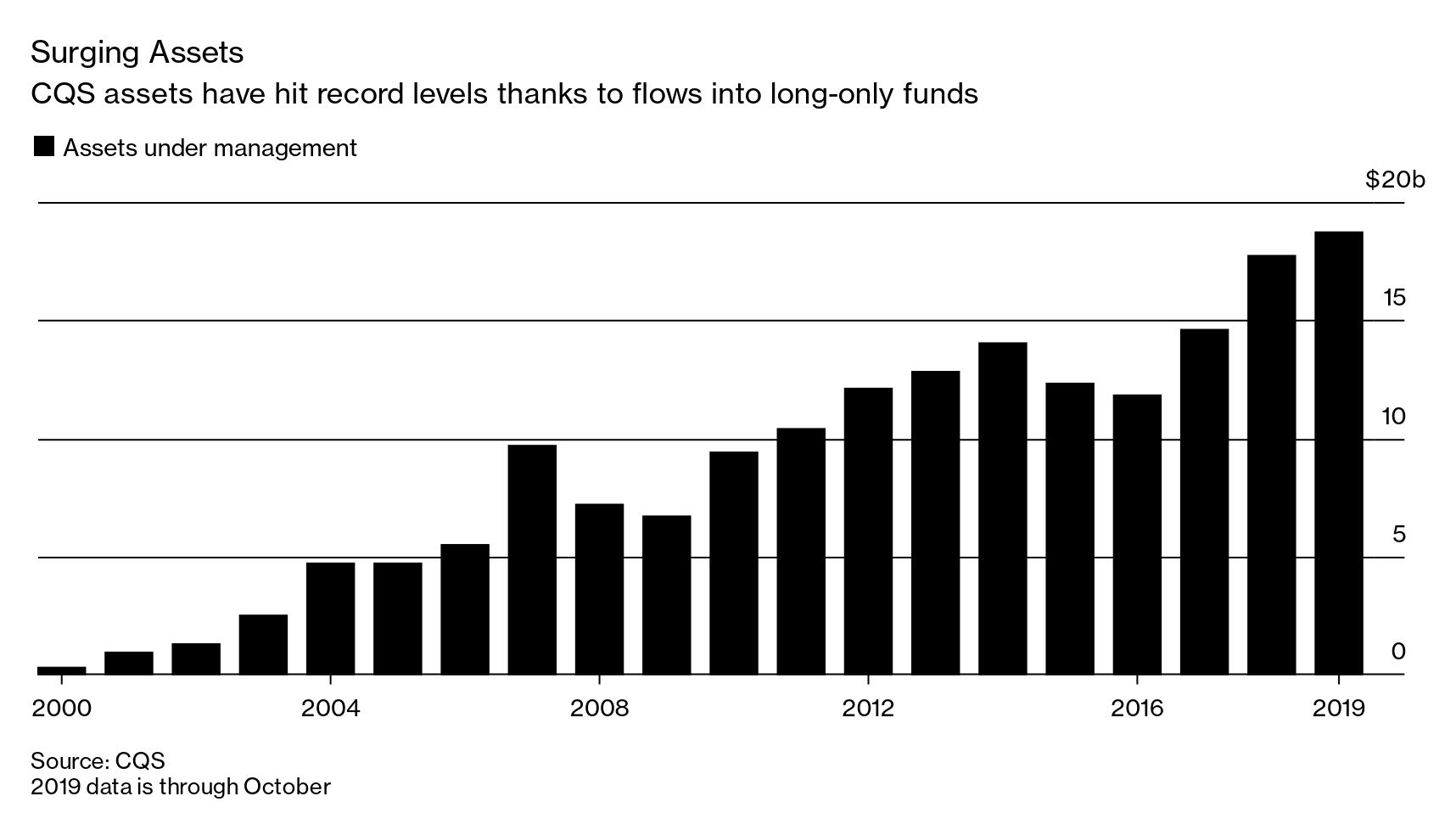 But Hintze, a former Australian army captain, knows he’s facing challenges. Almost half of CQS’s assets and most of the recent growth have been in long-only strategies—that is, those that only bet on securities rising in value. This approach brings in relatively lower fees and puts the firm in competition with mutual fund giants such as Pacific Investment Management Co. and Franklin Templeton. Hintze has entertained approaches from at least one private equity firm interested in buying a stake in CQS, according to a person with knowledge of the matter.

And then there’s investors’ increasing preference for quant funds and low-cost passive funds. Hintze has previously flagged this “paradigm shift” hurting active money managers. The veil of complexity around trading strategies such as special situations, asset-backed securities, or structured, convertible bonds has lifted, as data has become easier to get and process. To get an edge, Hintze says, managers need to add context and deep analysis of world economics and politics. “The reality is you need to have imagination,” he says. “It is problem-solving. That’s where it is.”

David Morant, who left CQS in 2015, saw some of this problem-solving first hand. As the head of equities, when he’d bring in a stock idea, he’d watch Hintze start thinking in tangents: Are there options to trade? Is there also a way to make money through credit bets, or on credit-default swaps, based on the same fundamental idea? “He makes money in ways that no one else does or can,” Morant says. “He effectively thinks in three dimensions.”

Three years ago, CQS brought in extra firepower by hiring Neil Brown as a geopolitical strategist. The former commodore in the British navy and adviser to the U.K.’s prime minister’s office is now the go-to person at CQS on topics ranging from populism to challenges to the world order.

Hintze surrounds himself with people who make him even better at what he does, Morant recalls of his former boss. That hasn’t stopped people from leaving. In 2016, CQS was hit by a series of departures, including the former chief investment officer for credit and another money manager in charge of distressed European debt, that got investors concerned about the staff turnover. In late 2018, Hintze brought in Rolet, his friend of more than 30 years, as CEO. That’s allowed Hintze to focus on investing.

CQS often goes against the herd. Consider the worries about a recession in late 2018 and early 2019. Hintze thought investors were overreacting to some technical changes in the market, and loaded up on risk in December and again in February. It’s worked so far. His fund was up 10.6 per cent through September 2019, ahead of the 6.8 per cent average gain for hedge funds.

Hintze was borne to Russian and German parents in Harbin, the capital city of China’s northeastern province of Heilongjiang. Soon after, his family left as stateless refugees for Australia. During his childhood, Hintze did odd jobs and saved his Christmas money. By the time he was 13, he had amassed A$108 and 43 cents (US$73). It was sitting in a savings bank account earning 2 per cent annually when his attention turned to Chrysler bonds paying 8.75 per cent quarterly.

He went on to get degrees in acoustics, electrical engineering, physics, and pure mathematics. His break came when he received an offer to study at Harvard Business School. So he took his life savings of almost A$8,000, left his job paying A$16,000 annually, sold his car, and borrowed A$32,000 to go. His father went apoplectic. He saw risk; Hintze saw opportunity.

After business school, Hintze started trading Yankee bonds for Salomon Brothers, in 1982, and joined Goldman Sachs Group two years later. He quit after he wasn’t made a partner. Brady Dougan, the former CEO of Credit Suisse AG, hired him and later gave Hintze $200 million to start his own hedge fund in 1999. Five years later, Hintze returned US$500 million to Credit Suisse and took full control of CQS. The firm’s 70 investment professionals run over half a dozen strategies.

It’s not unusual for Hintze’s traders to get emails in the middle of the night or weekends about bits of research he picks up. And unless quantum-powered artificial intelligence takes over everything in investing, his colleagues can expect many more years of after-hours notes. Asked about the succession and his retirement plans, Hintze says: “I still have 20 years left in me.” He turned 66 in July.