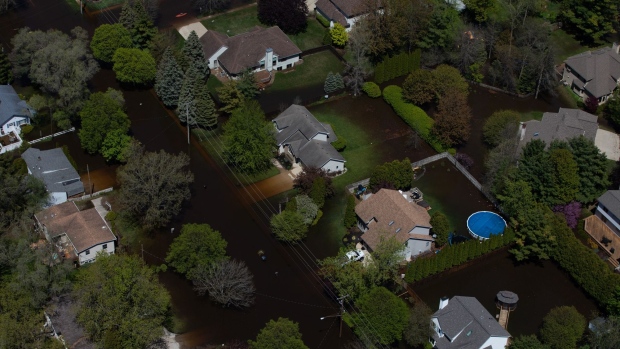 Houses surrounded by flood water are seen in this aerial photorgraph taken after dams failed in Midland, Michigan, U.S., on Wednesday, May 20, 2020. President Donald Trump said he's sending federal emergency workers to Midland, Michigan, where dam failures have flooded a Dow Inc. chemical complex and homes in a disaster that may force the evacuation of more than 10,000 people. , Bloomberg

(Bloomberg) -- The manager of a bankrupt Michigan dam company is blaming actions by regulators and residents for contributing to his dam’s collapse, which left entire communities flooded.

“I am frustrated by years of unwillingness by homeowners to contribute to improvements that could have improved the dam for everyone, and with the regulatory decisions that directly caused this catastrophe,” said Lee Mueller, a managing member at Boyce Hydro LLC and Boyce Hydro Power LLC, in a bankruptcy declaration filed Aug. 3.

Two of Boyce’s dams collapsed after days of heavy rain in late May. The Edenville Dam was breached on May 19, unleashing water that subsequently destroyed the company’s Sanford Dam. More than 10,000 people were evacuated from the city of Midland and the surrounding area.

In May, Boyce blamed the surrounding communities and said it rejected funding to upgrade the dam structures, which would have enabled the Edenville Dam to withstand more water. The privately held company said it couldn’t afford additional spillway capacity in court documents, and that its efforts to lower the water upstream to safe levels in prior years met intense opposition, in part because of concern about wetlands and freshwater mussels.

“This catastrophic event is exactly what I and the debtors had long been trying to prevent,” Mueller said in the documents.

Boyce filed for Chapter 11 bankruptcy in U.S. Bankruptcy Court in the Eastern District of Michigan on July 31. It estimated assets at $10 million to $50 million and liabilities of $1 million to $10 million. The company had four dams along the Tittabawassee River that were built in the early 1920s, according to court documents.

The case is Boyce Hydro LLC, 20-21214, U.S. Bankruptcy Court in the Eastern District of Michigan.