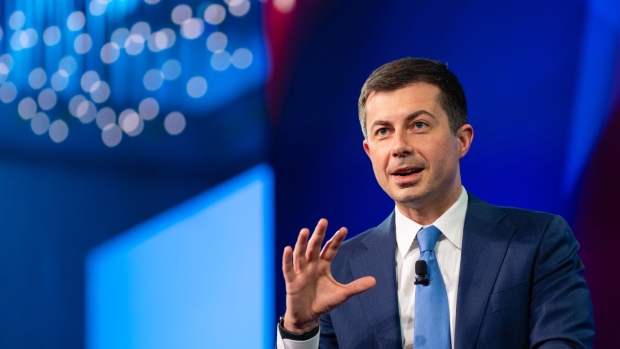 Pete Buttigieg, U.S. secretary of transportation, speaks during the U.S. Conference of Mayors winter meeting in Washington, D.C., U.S., on Thursday, Jan. 20, 2022. Several House Democrats promise to sink the White House's economic agenda if a scaled-back version now being considered eliminates an expansion of the federal deduction for state and local taxes. , Bloomberg

(Bloomberg) -- US airlines should buy meals and hotel rooms for passengers suffering lengthy flight delays, according to Secretary of Transportation Pete Buttigieg, who called the disruptions roiling the travel industry “unacceptable.”

In a letter to major carriers, Buttigieg asked that travelers be given meal vouchers for delays of at least three hours that are caused by the airlines themselves. Passengers stranded overnight should be given hotel lodging accommodations, he said.

The DOT is also planning to set up a new website before the busy Labor Day weekend for travelers with airline-by-airline policies on services they provide when flights are canceled or delayed.

“The level of disruption Americans have experienced this summer is unacceptable,” Buttigieg said in the Aug. 18 letter, which was sent to the heads of Delta Air Lines Inc., JetBlue Airways Corp. and other carriers. “Regardless of the cause of the delays or cancellations, the department expects airlines to provide timely and responsive customer service during and after periods of flight disruptions.”

The letter comes as airline travel this year has begun rebounding from the pandemic, prompting dramatic increases in airline-caused delays and cancellations. The DOT is “contemplating” creating new regulations to add protections to passengers, Buttigieg said in the letter.

Meal vouchers would be an unusual offering for airlines, which typically only commit to giving passengers food on the aircraft and only after lengthy tarmac delays. Major airlines already provide overnight accommodations for passengers under their policies.

“Carriers strive to provide the highest level of customer service and look forward to working with the DOT to continue providing transparency for the traveling public,” Airlines for America, the trade group representing major carriers, said in a statement in response to Buttigieg’s letter.

Airlines emerging from the impacts of Covid-19 have faced “challenges,” but comply with all federal laws, the group said.