From Berlin’s edgy Kreuzberg to Paris’s 10th arrondissement to that capital of global hipsterdom, Brooklyn, the list of neighborhoods where Spann’s firm rents out apartments by the thousands reads like a guide to the hottest of gentrifying hot spots.

And today, no place looks more attractive to Spann, the chief executive officer of Akelius Residential Property AB, than Canada. Akelius plans to expand on the footholds it has in Montreal and Toronto, including in the suddenly fashionable Parkdale neighborhood, and push into Ottawa, too.

The reason is simple: Canada is home to a severe housing shortage.

Buying a place is out of reach to an ever-growing number of Canadians -- even many in the yuppie set -- after the pandemic turbocharged an already red-hot real estate market and sent prices soaring to record highs. Now, as vaccination rates climb and offices slowly reopen, the pressure is moving to the rental market, with rents rising and vacancy rates falling.

It’s a story playing out in many countries across the globe, including across the border in the U.S., but it’s particularly acute in Canada. A recent Bank of Nova Scotia study revealed the nation has the fewest housing units per capita -- whether to buy or rent -- among Group of Seven countries.

That’s making the market irresistible to Akelius as well as the private-equity giant Blackstone Inc. and a slew of boutique firms run by local financiers. Collectively, they invested a record $11 billion (US$8.6 billion) in apartment buildings in 2020 and are on track to match or surpass that total this year, according to commercial brokerage firm CBRE.

“We expect the housing shortage to continue,” Spann, who joined Sweden-based Akelius in 2006, said in an e-mail.

The model is steadily profitable and easy to execute, albeit a bit unseemly, especially at a time of soaring global inequality: Buy old buildings, renovate them, jack up the rents and market the new units to all those young professionals who suddenly can’t afford to buy.

And while tensions are mounting with the biggest losers in this trade -- the existing, and typically working class, tenants who say they’re being forced from their homes by the upgrades (or “renovicted” in the local parlance) -- there’s little sign that investor interest will subside.

“If you acquire old rental housing properties, it’s quite possible to make a lot of money from that by raising the rent, raising the fees, just squeezing more from tenants,” said Martine August, a professor of planning at the University of Waterloo who has studied the financialization of Canadian housing. “It’s been lucrative for them to date and I think it will continue to be in the future.”

Part of the growing enthusiasm for the trade stems from how well the business held up when the pandemic upended the economy, a reminder of how consistent the returns have proven to be.

As shopping malls and office buildings tanked in 2020, apartment buildings threw off a solid 5.5 per cent return, according to data from MSCI Inc. And over the past two decades, they’ve delivered average annual returns of 9.8 per cent, according to research compiled by brokerage Raymond James. On a risk-adjusted basis, that’s tops among all Canadian real-estate investments.

Canada’s apartment buildings are old. Most were built four decades ago or more. This gives landlords ample justification to carry out the kinds of renovations that can be passed on to tenants through rent increases under various jurisdictions’ rent control regimes, or, more commonly, when units turn over and rents can be freely set.

In the province of Ontario, home to both Toronto and Ottawa, landlord applications to evict tenants for reasons other than failing to pay rent increased by nearly 100 per cent between 2014 and 2020, while applications to raise rent on current tenants beyond what’s allowed under rent control rules rose by nearly 40 per cent, according to data from the province’s Landlord and Tenant Board. 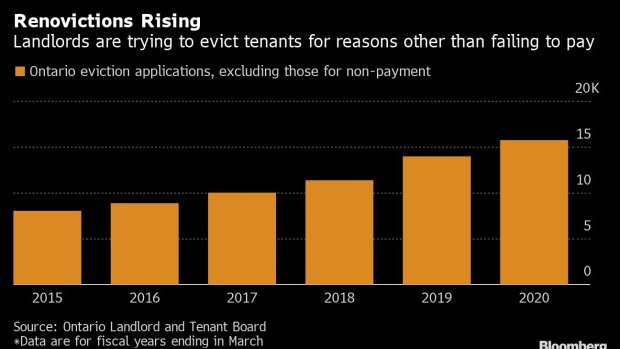 This is sparking growing furor across the country, like on one recent muggy afternoon in Toronto, when a group of some two dozen irate tenants descended on the leasing office of a building owned by Hazelview Investments, one of Canada’s largest institutional apartment landlords.

The crowd surrounded a pair of Hazelview employees to vent about how the company was ignoring their pleas to address problems like mold, broken laundry machines and infestations of rats, roaches and bed bugs. Instead, they said, Hazelview was pursuing cosmetic changes like balcony repairs and landscaping that they suspected were a step toward demanding rent increases.

“Hazelview don’t care about the tenants,” one woman yelled. “They treat them like garbage.”

The standoff ended when the Hazelview regional manager promised to look into the complaints and to go through the list of more than 100 outstanding work orders he was handed. Hazelview did not respond to requests for comment.

Akelius has come under harsh criticism, too. A United Nations study last year concluded that the firm “has created a hostile environment for its tenants through a severe degradation of housing conditions, higher rents and increased risk or threat of eviction.”

Spann refuted the findings. “We have always emphasized that we are ready to talk about criticism,” he said. “We want satisfied tenants, and if they make a specific complaint, we follow it up and remedy any deficiencies. Akelius has a total of 70,000 satisfied tenants.”

So far, actions like those that day at Hazelview have have met with mixed success in Canada. The Vancouver suburb of New Westminster enacted a bylaw against renovictions two years ago, and Toronto is now studying that law with an eye to doing the same. But it’s unclear how it might help the Hazelview tenants, for example, whose problems are with the renovations happening around their units rather than the units themselves.

The broader problem may be that, unlike some places in Europe, where it’s common for people to rent all their lives, Canadians have long seen paying rent as a temporary step along the road to home ownership. The result is that tenant issues haven’t been a high priority at any level of government.

And there’s little indication that the tenants’ movements demanding stricter rent controls will become the kind of political force they are in European cities like Berlin, which last year tried to freeze rents entirely.

This is a point that Spann stressed when explaining why Canada is one of the best places in the world to buy apartment buildings right now.

“There is legal certainty,” he said. “The municipalities in Canada cooperate with landlords.”