Canadian assets may finally begin to feel some love.

A deal to join the U.S. and Mexico in a reworked North American trade pact, news that Royal Dutch Shell Plc and its partners are poised to move ahead with a liquefied natural gas project on the country’s west coast, and an offer for a Canadian energy company point to gains ahead for the country’s stock market and currency.

“This is very upbeat news, there was a lot of NAFTA uncertainty weighing on economy, stocks, with equities underperforming,” Michael Gregory, deputy chief economist at Bank of Montreal, said in a phone interview. Economic activity will probably pick up and the Bank of Canada is likely to tighten more than it otherwise would have, Gregory said.

The flurry of developments on trade and energy lift an overhang that has held back business investment and growth in the world’s 11th biggest economy. The Canadian dollar appreciated almost 1 per cent overnight and was quoted at $1.2811 against the greenback at 8:53 a.m. in Toronto, the strongest level in four months while S&P/TSX stock futures were little changed.

The new U.S.-Mexico-Canada Agreement, or USMCA, covering a region that trades more than US$1 trillion annually, gives the U.S. improved access to Canada’s dairy market, stronger intellectual property provisions, and includes tighter rules of origin for auto production, according to two senior Trump administration officials who spoke to reporters on condition of anonymity. 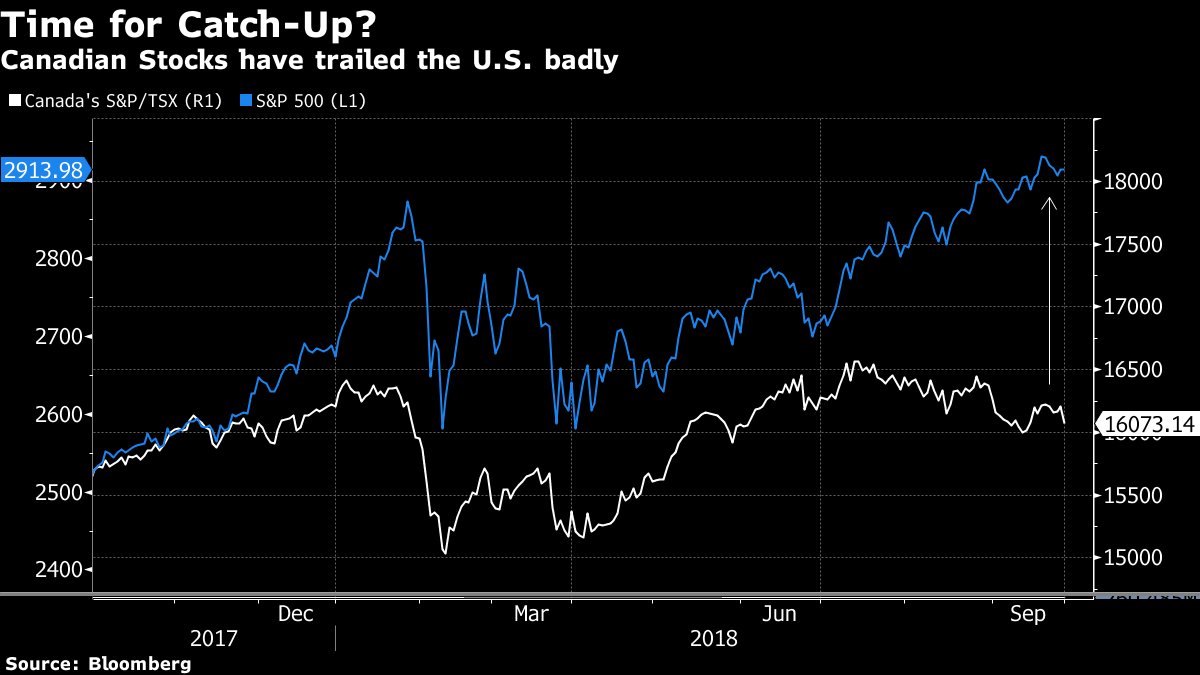 “The Canadian market has been in the bottom of the league tables all year, kind of dismal and in particular the heavy hitters like the banks and the metals,” David Baskin, president of Toronto-based Baskin Wealth Management, which oversees $1.2 billion ($940 million), said by phone. “I think a lot of that has to do with uncertainty about trade and the Canadian economy.”

The country’s benchmark stock index is down slightly this year despite strong global growth, making it the 11th worst performer among developed markets and trailing the 9 per cent gain in the S&P 500. The loonie has risen in recent months but is down 2.65 per cent on the year against its U.S. counterpart.

On the oil front, Husky Energy Inc. made a $3.3 billion hostile bid for MEG Energy Corp., setting up a battle between the Canadian oil company linked to Hong Kong billionaire Li Ka-shing’s family and Chinese giant Cnooc Ltd., a major investor in the targeted oil-sands producer.

"A global energy company has said oil sands assets are worth a lot -- that’s a positive development for Canada," Ian de Verteuil, head of portfolio strategy at Canadian Imperial Bank of Commerce, said in a telephone interview. “There’s three positive things for Canada.”

Mark McCormick, North American head of FX strategy at Toronto-Dominion Bank, said the important thing to consider is how much of the new trade agreement has been priced in.

“It also depends on whether it moves the needle on Bank of Canada pricing next year. Do we get another hike for instance?”

McCormick said there is room for momentum traders to try and push the Canadian currency lower but “we don’t think this is a game-changer for the loonie.” The Canadian dollar has been the best-performing currency the past three months already, McCormick noted in an email. He sees short-term fair value for the currency at 1.2850 per U.S. dollar.

Who is the biggest winner of the new trade pact?