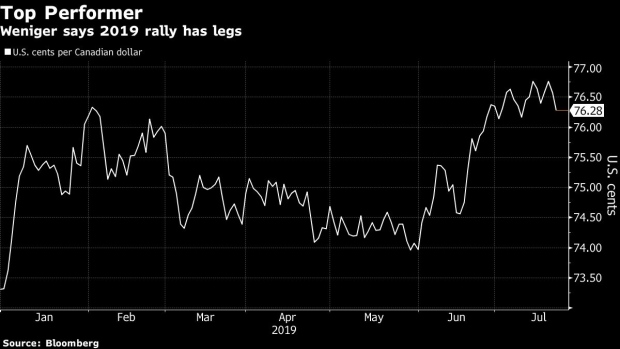 (Bloomberg) -- The prospect of a ballooning U.S. budget deficit and signs of American housing-market weakness mean that the Canadian dollar rally likely has legs, according to Jeff Weniger at exchange-traded-fund manager WisdomTree Investments Inc.

The loonie is already the best-performing major currency this year. But with the U.S. fiscal outlook darkening amid the risk that a softer housing market could hurt consumer sentiment in the world’s biggest economy, “we continue to think that there are more gains in the Canadian dollar,” said Weniger, director of asset allocation at the money manager.

While Canada’s economy has been dealing with overheated real estate markets such as in Vancouver, in the U.S., some West Coast markets still may have to adjust, he said. That could undermine U.S. consumer sentiment and possibly strengthen expectations for more aggressive Federal Reserve rate cuts. There are already signs that U.S. home buyers are less likely to face a bidding war.

“It could portend many things that could hinder the greenback relative to CAD, such as the Fed needing to go easier,” or U.S. President Donald Trump talking down the dollar amid adverse data on the housing front, Weniger said in an interview in Toronto last week. His firm, which oversees about $60 billion, is based in New York.

The loonie has advanced 4% this year to around 76.30 U.S. cents, or about C$1.3110. The median estimate of analysts surveyed by Bloomberg is for it to end the year at C$1.30. Some of Canada’s top banks are signaling concern about the currency’s near-term outlook. They’re worried it could stumble if Canadian economic data fail to sustain recent strong results amid trade friction.

For Weniger, the path of the U.S. budget deficit strengthens his view that the loonie will outpace the dollar. He looks at candidates’ promises as the 2020 U.S. presidential election approaches and sees little prospect of halting the fiscal deterioration. According to people briefed on the discussions, Congress and the White House are on the brink of a spending and debt-limit deal that could push the annual budget gap over $1 trillion next year.

“The U.S. budget is one of those metrics that doesn’t matter until it matters,” Weniger said.

What’s striking for him is that the loonie has rallied this year even as analysts have been cautious about its potential.

“If you call 80 cents that makes you some of sort of wild bull,” said Weniger, who doesn’t publish estimates for the Canadian dollar. “That is a testament to how much in-the-basement sentiment has been.”

To contact the reporter on this story: Esteban Duarte in Toronto at eduarterubia@bloomberg.net

To contact the editors responsible for this story: Nikolaj Gammeltoft at ngammeltoft@bloomberg.net, Mark Tannenbaum, Boris Korby