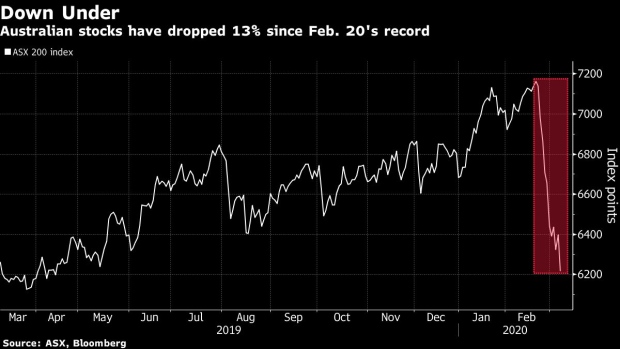 Residential buildings and houses stand in Sydney, Australia, on Saturday, Jan. 12, 2019. Prices in Australia's biggest city have tumbled 10 percent and some economists are tipping a similar fall this year. While the central bank isn't panicking just yet, a 15 percent nationwide drop in prices would cut about A$1 trillion ($720 billion) from the housing stock value. Photographer: Brendon Thorne/Bloomberg , Bloomberg

(Bloomberg) -- Australian supermarkets and real estate stocks may be the best way to play defense amid uncertainty surrounding the spreading coronavirus.

“There’s still a lot debate on how bad it’s going to be, how much of the world is going to get it and whether it’s containable,” Davis, who manages about A$1 billion ($660 million) of Australian stocks, said in an interview in Sydney. “We’ll just ride this out until we see what the end game is.”

Australian stocks have tumbled about 13% from a record high in just over two weeks amid fears the virus will impact supply chains and weigh on demand. More than half of the domestic firms that reported half-year earnings in February missed expectations, according to data compiled by Bloomberg.

The virus, which has around 100,000 confirmed cases and more than 3,000 deaths after emerging from China’s Wuhan province late last year, is weighing on an already soft Australian economy.

Retail sales declined for a second straight month in January, the biggest back-to-back drop since 2010, while futures traders are expecting Australia’s central bank to cut interest rates next month to 0.25%, opening up the prospect of unconventional policy.

Here’s how Davis has structured the Australian stock portfolios:

To contact the editors responsible for this story: Edward Johnson at ejohnson28@bloomberg.net, Tim Smith, Margo Towie