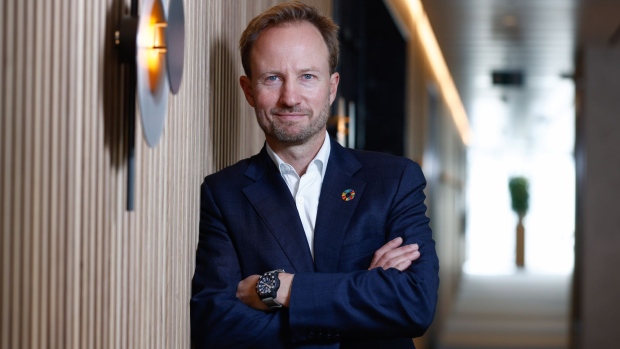 Christian Sinding, chief executive officer of EQT Partners AB, at the company's offices in Zurich, Switzerland, on Thursday, Sept. 23, 2021. EQT, like many of its competitors, has benefited from record deal flow and fund raising for the global private equity industry. , Bloomberg

(Bloomberg) -- EQT AB is exploring a potential acquisition of Swiss banking software specialist Temenos AG, according to people familiar with the matter.

The Stockholm-based buyout firm is in the early stages of considering a bid for Temenos, which has a market value of 9.1 billion Swiss francs ($9.9 billion), the people said, asking not to be identified discussing confidential information.

If EQT does take Temenos private, it would be one of the largest buyouts involving a listed European company this year, according to data compiled by Bloomberg.

There’s no certainty EQT will decide to proceed with a move for the company, the people said. Representatives for EQT and Temenos declined to comment.

Private equity firms have already announced deals valued at $242 billion targeting companies in Europe this year, the Bloomberg data show. That’s roughly double the amount in the same period a year ago and the highest annual total on record.

On Monday, EQT teamed up with Hellman & Friedman on a joint 3.7 billion euro ($4.3 billion) offer for Zooplus AG, ending a takeover battle between the private equity companies for the German online pet-food retailer.

Temenos provides a range of software products to banks and financial institutions, covering everything from payments to fund administration. It has used acquisitions such as the 2017 purchase of Australia’s Rubik Financial Ltd. to grow its business, benefiting from an urgency in the banking industry to adapt to changing customer habits and an increasing shift to online and mobile payment transactions.