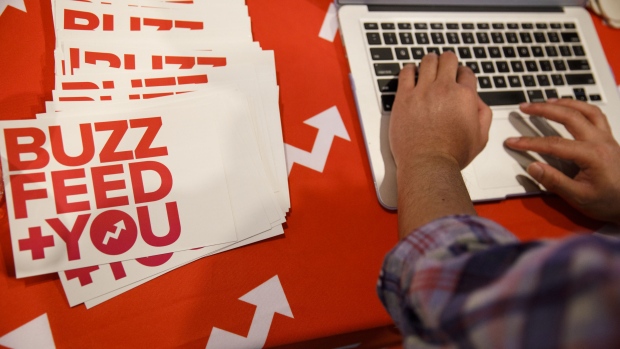 An attendee fills out a contact form for jobs with Buzzfeed Inc. during the TechFair LA career fair in Los Angeles, California, U.S., on Thursday, March 8, 2018. The U.S. Department of Labor is scheduled to release initial jobless claims on March 15. , Bloomberg

(Bloomberg) -- BuzzFeed News employees are planning to stage a walkout Monday, according to people familiar with the matter, just days after a similar protest by staff at Vox Media led to that company’s first labor agreement.

BuzzFeed’s U.S. journalists agreed to unionize in February, saying they would seek better benefits and fair pay after seeing some colleagues lose their jobs the prior month. Since then, they’ve been calling on BuzzFeed’s management to recognize their union.

The NewsGuild, which represents BuzzFeed’s union, didn’t respond to a request for comment.

A BuzzFeed representative said the company has made an offer to voluntarily recognize the union, but the terms haven’t been accepted: “It has been on the table since last week. We hope they’ll accept it.”

Unions and companies frequently spar over which workers should be included as part of a new bargaining unit.

In January, BuzzFeed eliminated 15% of its headcount, part of a wave of layoffs at media outlets this year. Publishers like BuzzFeed, once the darlings of the media industry, have struggled to find profitable business models.

The tumult has led journalists at several media outlets to opt for collective bargaining. While that hasn’t prevented layoffs, it has in some cases cushioned the blow. For instance, agreements can help ensure that workers who lose their jobs get severance pay.

Earlier this month, hundreds of Vox Media employees walked off the job. A day later, they reached a tentative labor agreement. The union contract includes minimum salary guarantees and four months of paid parental leave, among other things.

To contact the reporters on this story: Gerry Smith in New York at gsmith233@bloomberg.net;Josh Eidelson in Washington at jeidelson@bloomberg.net

To contact the editors responsible for this story: Nick Turner at nturner7@bloomberg.net, Mark Schoifet