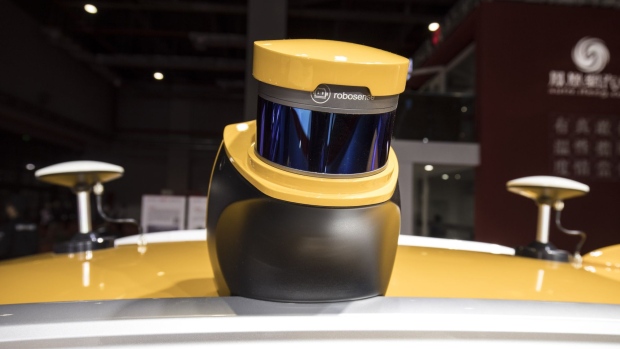 A Robosense Lidar camera sits on a Hanteng Auto e+ Pilot autonomous vehicle on display at the Auto Shanghai 2019 show in Shanghai, China, on Wednesday, April 17, 2019. China's annual auto show, held in Shanghai this year, opened to the media on April 16 amid the specter of an electric-car bubble and as the world's largest auto market trudges through its first recession in a generation. , Bloomberg

(Bloomberg) -- RoboSense, a Chinese developer of sensor technologies used in self-driving cars, is raising about $150 million in a new funding round to bankroll its product expansion, according to people familiar with the matter.

The latest round has drawn investors including China Structural Reform Fund and Mirae Asset Securities Co., said the people, who asked not to be identified as the information is private. A number of existing investors of BYD Co.-backed RoboSense could also participate, one of the people added.

Deliberations are ongoing and some details may change, the people said. A representative for Mirae Asset Securities declined to comment, while representatives for BYD, China Structural Reform Fund and RoboSense didn’t immediately respond to requests for comment.

Founded in 2014 by Chief Executive Officer Qiu Chunxin, Shenzhen-based RoboSense has more than 1,000 employees and owns over 700 lidar-related patents globally as of end-2021, its website shows. Last year, the company signed a strategic cooperation agreement with BYD, which also invested an undisclosed amount, according to a statement.

Robosense is working with financial advisers on preparations for a Hong Kong initial public offering as soon as next year, Bloomberg News reported in December. A listing could raise as much as $1 billion, the people have said.

China Structural Reform Fund, a fund set up by China Chengtong Holdings Group Ltd. in 2016 with the approval of the State Council, manages about 350 billion yuan ($48.8 billion), according to Chengtong’s website. The fund has been involved in various mixed-ownership reform programs, helped state-owned enterprises in financial difficulty and recently stepped up investing in startups. It has participated in several Hong Kong initial public offerings as a cornerstone investor.