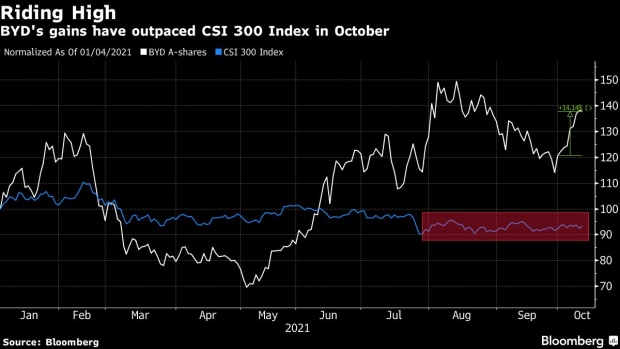 (Bloomberg) -- Chinese electric-vehicle stocks, led by BYD Co. Ltd., emerged as a bright spot in the nation’s lackluster markets, as robust sales reports ease concerns about the global chip shortage and lure investors back into the sector.

Shares in the Shenzhen-based EV maker rose eight straight days, the longest streak in a year, before closing slightly lower on Tuesday. Still, BYD’s 14% rally this month is among the best on the CSI 300 Index, with industry peers Great Wall Motor Co. and Guangzhou Automobile Group also among the outperformers. BYD’s Hong Kong-listed stock has gained 16% in October.

The rebound among EV firms comes after an earlier selloff stoked by uncertainty around chip supplies and China’s crackdown on the technology sector. Meanwhile, the benchmark index has been stuck in a narrow range, hampered by an economic slowdown, property curbs and worsening power crisis.

Sales of new energy vehicles surged 148% in September, data from the China Association of Automobile Manufacturers showed, spurred by Beijing’s promotion of greener vehicles to cut pollution. The better-than-expected figures have offset worries over supply issues, according to Kelvin Lau, an analyst at Daiwa Capital Markets. “Automakers are expecting a stronger fourth quarter and likely to raise their sales guidances,” he said.

Government support is key for the attractiveness of EV names, particularly in the wake of crackdowns on other sectors. “Policy risk is very low compared to other industries like education, internet or property,” said Toliver Ma, analyst at Guotai Junan Securities Co., who added that Chinese companies that have links to Tesla Inc., which is trading near a record, may get an added boost.