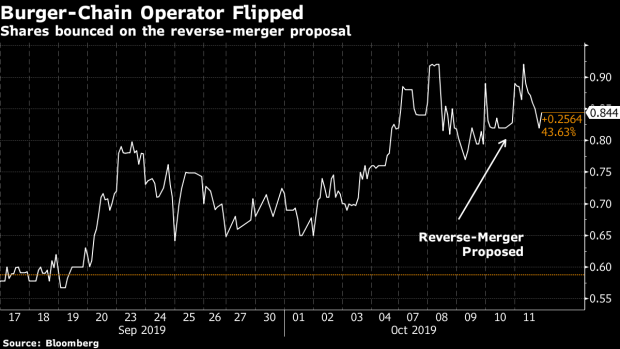 (Bloomberg) -- A burger chain and cancer drug developer have struck a bargain to trade places amid market tumult, bypassing the IPO process.

Chanticleer Holdings Inc. and Sonnet BioTherapeutics proposed a partnership to conduct what is known as a reverse merger. This would allow Chanticleer, whose restaurant brands include BGR, Just Fresh and Hooters, to go private, and allow Sonnet to bypass the IPO process, the biotech’s chief financial officer Jay Cross said.

The deal appears to be mutually beneficial at face value. Chanticleer’s desire to go private after seeing its stock move sideways for years works with Sonnet’s desire to go public, with more control. Sonnet gets capital. Chanticleer receives shares at a 10% discount in return.

“The $100 million share subscription facility agreement afforded us access to capital in a practical and economical way,” Cross said in a telephone interview, explaining that the company found an ideal partner in Chanticleer and a more “opportunistic” path to go public after evaluating all possible options.

Josef Schuster, the founder of Chicago-based IPO firm Ipox Schuster LLC, said a company might pursue such an avenue to avoid associated scrutiny and costs. Small and big biotech and biomed deals have paid out anywhere from half a million dollars to tens of millions in underwriting fees. Chanticleer shareholders appeared to like the deal, with shares rising about 60% in after-hours trading Thursday night. But the thrill chilled a little Friday, with shares rising less than 2%.

Sonnet, via its bank Chardan Capital Markets, was introduced to Chanticleer in the third quarter of 2019, according to Cross. Assuming shareholders green-light the deal, Sonnet hopes to list under ticker “SONN” before the end of the year. Prior to joining Sonnet in May 2019, Cross served as managing director with Chardan Capital’s healthcare investment banking team, where he focused on biopharmaceuticals.

Sonnet, based in Princeton, New Jersey, has a pipeline of oncology drugs in development. Its most advanced product is meant to treat nerve damage caused by chemotherapy, while other molecules in earlier stages of testing target tumors.

It was an impossible meet-cute -- one slings burgers, the other develops cancer drugs -- but they found kinship in their respective dilemmas.

“We were philosophically aligned. Chanticleer would prefer to operate as a private entity. We were looking for a fully-listed Nasdaq company interested in a reverse merger. It wasn’t about fitting burgers and biotech,” Cross said.

It’s getting harder to ignore how common the anything-but-an-IPO refrain is becoming following high- and low-profile flops. Bill Gates-backed Vir Biotechnology Inc., dropped a quarter of its value on its trading debut on Friday -- a worrying sign for an already struggling market for biotech offerings. That follows a week of mixed debuts for others and ADC Therapeutics SA’s withdrawing its filing due to adverse market conditions.

“Given the poor trading in biotech IPOs it is likely that a regular IPO wouldn’t work and the best way for Sonnet to go public was via a reverse merger,” said Kathleen Smith, principal of Renaissance Capital, the provider of the IPO ETF. “Reverse mergers can get the job done, but value creation is not easy from the standpoint of the differing investor bases.”

To contact the reporter on this story: Crystal Kim in New York at ckim426@bloomberg.net

To contact the editors responsible for this story: Brad Olesen at bolesen3@bloomberg.net, Will Daley, Courtney Dentch