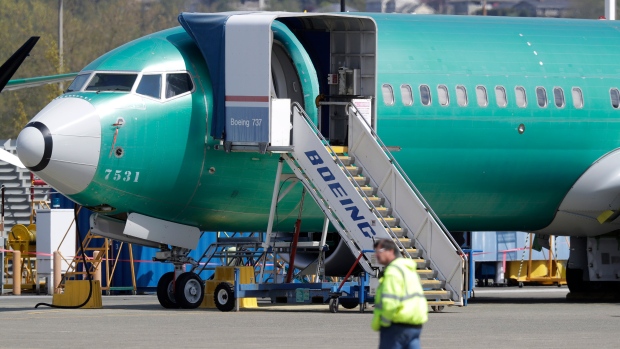 In this April 26, 2019, file photo a worker walks past a Boeing 737 MAX 8 airplane being built for Oman Air at Boeing's assembly facility in Renton, Wash. AP Photo/Ted S. Warren

CAE Inc. has been building unordered pilot training simulators for the grounded Boeing 737 Max aircraft in anticipation of pent-up demand once the commercial aircraft is permitted to resume operations.

The simulator and training company won't disclose how many of the “whitetail” units have been built with no confirmed buyer. But the Montreal-based company says it is preparing for increased demand for the plane's pilot training system.

The Max has been grounded since March after two accidents killed 346 people. On Monday, Boeing said it hopes to resume deliveries of the Max in December and win Federal Aviation Administration approval of changes to the plane and a pilot-training course in January, clearing the way for the plane to return to service in the United States.

CAE has delivered 19 of the 48 737 MAX simulators ordered so far, including nine shipped this year. The unsold simulators will eventually be shipped to airlines or to its network of pilot training centres.

“Hopefully, the airplane will fly again in the near future, but we're well-positioned when that happens,” CEO Marc Parent said during a conference call about its latest quarterly results.

He said the long-term prospects of the aircraft are very good and that airlines will want to train pilots on the system changes that will be incorporated in simulators through software updates.

“Our experience is that airlines rarely do just the minimum that the regulators will ask them, even should the training requirements be exactly the same as before,” Parent said. “I fully expect that some airlines, a lot of airlines, will move beyond that because they'll want to have dedicated 737 MAX simulators for their own reasons. So we'll be ready for that.

Parent said the airplane's grounding hasn't had a significant financial impact on CAE.

“The impact hasn't been consequential to CAE's results and we don't expect them to be based on what is expected to be the return to service date.”

It's not totally unusual for the training and simulator company to do some advance building, especially on high volume planes like the Airbus A320 or Boeing 737 Max, added Andrew Arnovitz, vice-president of investor relations and strategy.

“But here, yes, we are making some call in terms of there being pent-up demand given the fact that the aircraft has been out of commission for as long as it has been and the deliveries as well,” he said. “We think it's just smart preempting the demand that we expect.”

Meanwhile, Boeing announced that it has appointed former U.S. ambassador Donna Hrinak to the newly created position of president of Boeing Canada.

The growth came as revenue at CAE's civil aviation business rose 35 per cent compared with a year ago to $529.9 million, while revenue at its defence and security business totalled $336.5 million, up five per cent from a year ago.

Health care revenue was $30.4 million, the same as a year ago.

Analysts on average had expected a profit of 25 cents per share and $849.9 million in revenue, according to financial markets data firm Refinitiv.

CAE's shares gained $1.37 or four per cent to $35.66 in Wednesday trading on the Toronto Stock Exchange.