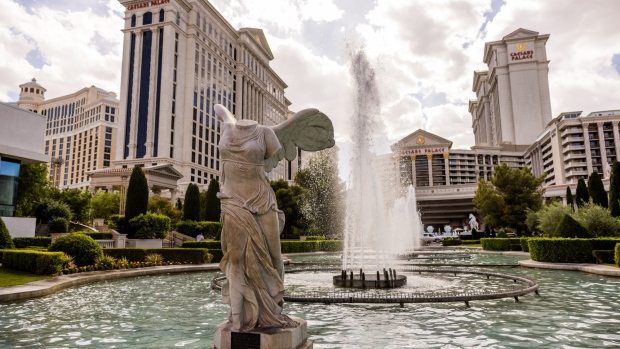 Fountains outside Caesars Palace hotel and casino in Las Vegas, Nevada, U.S., on Sunday, May 2, 2021. Caesars Entertainment Inc. is scheduled to release earnings figures on May 4. Photographer: Roger Kisby/Bloomberg , Bloomberg

Caesars, the largest owner of casinos in the U.S., reported adjusted first-quarter earnings of $505 million before interest, taxes, depreciation and amortization, a 23% increase from a year earlier.

Reeg -- who orchestrated the merger of Caesars and Eldorado Resorts last year, along with the recent purchase of sports betting operator William Hill Plc -- said on a conference cal Tuesday that the company would likely earn $1 billion in profit in at least one quarter this year and that he’d be “disappointed” if Caesars doesn’t generate over $4 billion for all of 2022.

Consumers cooped up in their homes by the coronavirus socked away savings that they’re now beginning to spend on travel and entertainment. Casinos outside of Las Vegas have led industry’s recovery because guests don’t have to fly to them. Younger patrons with fewer entertainment options have been among the first to return. Older guests may follow.

“As the world reopens, we already see this capital being unlocked and coming into our doors,” Reeg said. “I think the demand for entertainment and just fun, after the last 12 to 14 months, is going to be like nothing any of us have seen in our lifetime.”

Like other Las Vegas resort operators, Caesars has seen an especially steep decline in its meeting and convention business, which has been effectively shut down for the past year. Weekday hotel rates, which depend on that business, remain low. But leisure travel has picked up.

On the call, President Anthony Carano said “weekends in Las Vegas are sold out for the foreseeable future.”

The Caesars website showed rooms available at 10 of the company’s Las Vegas resorts this weekend at rates from $179 a night.