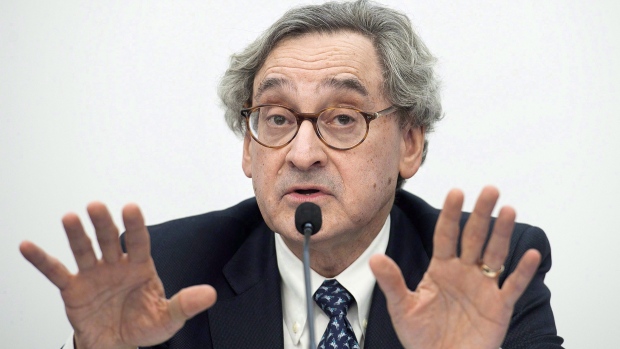 MONTREAL -- The chief executive of the Caisse de depot et placement du Quebec is stepping down from the pension fund manager to become head of the Munk School of Global Affairs and Public Policy at the University of Toronto.

The Quebec fund manager says Michael Sabia, 66, is leaving at the beginning of February, a little more than a year earlier than expected.

"I know that I am leaving the Caisse and its people in a strong position to seize the many opportunities that lie ahead for them as I move on to my next challenge," Sabia said in a statement on Tuesday.

Sabia, who was not available for interviews, noted that leading the unique Quebec institution has been "the greatest privilege" of his career.

In February 2017, his mandate was renewed until March 31, 2021, to allow Sabia to oversee the completion of the Montreal electric railway project.

Caisse chairman Robert Tessier said it has retained the services of an international firm to search for Sabia's replacement and planned to complete the process at the beginning of 2020, with the appointment of a successor approved by the government.

Potential candidates have probably already been identified, said Michel Nadeau, a former senior Caisse executive and director general of the Institute on Governance of Private and Public Organizations.

"If Mr. Sabia leaves in February, it's because they already have people in mind," he said in an interview. "They feel that the government would prefer to have another person."

Finance Minister Eric Girard denied that the government wanted to place its own candidate at the Caisse.

Girard, who said the Caisse could be headed by a woman, felt Sabia's replacement would have to ensure its portfolios are resilient through a period that will eventually include bear markets.

Sabia's appointment was criticized a decade ago because he was not from Quebec.

But he made a name for the Caisse with a focus on reducing the volatility of returns, said governance expert and Concordia University professor Michel Magnan.

"He was hired to restore confidence in the institution. On that, I think we cannot argue."

Sabia was appointed to head the Caisse after it was shaken by the financial crisis, which resulted in $40 billion of losses the previous year.

Under his guidance, the Caisse said it has produced "solid and sustainable returns" of 9.9 per cent over 10 years, while the size of its net assets has almost tripled to $326.7 billion at June 30.

Over the last decade, the institution has diversified, focusing particularly on sectors such as infrastructure and private equity, while continuing to invest in real estate and adjusting its strategy.

"He confounded skeptics, me being the first," said Nadeau, who believes Sabia's mandate can be viewed in two periods.

Nadeau said Sabia spent the first years reducing the portfolio's risk and then relaunching an international expansion with 10 offices abroad. He also put more emphasis on investments in Quebec.