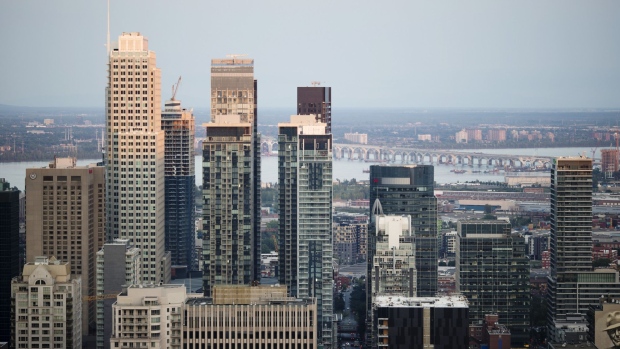 Commercial and residential buildings stand in the city skyline of Montreal, Quebec, Canada, on Saturday, Aug. 18, 2018. Median single-family home prices in Montreal rose 5.7% to C$336,250 in July from a year ago, according to the Greater Montreal Real Estate Board (GMREB). , Bloomberg

(Bloomberg) -- The head of Quebec’s $308 billion pension plan wants to expand further into private lending for many reasons, including attractive returns and manageable risk. There’s another, too: Because of growing demand, it’s easier than ever to get out.

“We have to think about private assets as way more liquid than 10, 15 years ago,” Charles Emond, chief executive officer of Caisse de Depot et Placement du Quebec, said in a meeting with Bloomberg News reporters and editors. “Our ability to syndicate large positions in infrastructure, private equity or real estate is tremendous.”

Traditionally, owning assets such as non-bank loans meant being stuck with them until maturity -- or default. Now, Emond said, there are so many other investors who want exposure but can’t lend directly that Caisse can, if it needs to, offload billions of dollars’ worth of assets in the space of a month.

Credit markets are so popular that investors are venturing into riskier debt financing deals, he said, and in private credit “it’s easy to slip into the higher end of the risk spectrum without noticing.”

“We’re seeing a lot of excesses right now, and it’s not going to fade away or go away anytime soon,” he said.

Caisse has an advantage in private credit, Emond contends, because it originates the loans or deals directly with the borrowers, allowing it to impose conditions. That’s different than when investors buy paper in the market and can’t negotiate terms, he said.

“One of the important things is when things go sour in the private credit market, we will have that seat at the table,” he said.

A flashing sign of the huge amount of money circulating in private credit is the intensifying fight for talent.

“I got people being approached by New York and London firms. Right now we’re competing against everybody in that space,” he said. “It’s a real war. It’s real battle out there.”