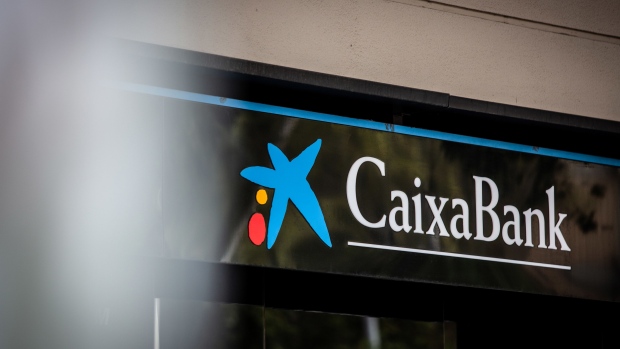 Signage above the entrance to a Caixabank SA bank branch in Barcelona. Photographer: Angel Garcia/Bloomberg , Bloomberg

(Bloomberg) -- CaixaBank SA is considering the sale of part or all of its stake in Vienna-based lender Erste Group Bank AG, ending its foray into eastern European banking following its acquisition of Spanish rival Bankia SA.

Caixa said it may sell a 5.4% stake held directly in Erste, and also assess whether to settle swaps underlying another 4.5% of shares, according to a statement Thursday. A deal will depend on market conditions and the direct stake may be offered to pre-identified buyers, it said.

The full stake is valued at about 1.65 billion euros ($1.92 billion) at Thursday’s closing price for Erste shares in Vienna.

The Spanish lender is part of a syndicate that groups some of the largest owners in Erste Group. The bloc’s ownership may fall to about 20% after a transaction, the Erste Foundation, which represents the syndicate, said in a separate statement.

Caixa earlier this year acquired smaller competitor Bankia, a deal that positioned it as the largest domestic bank in Spain. Unlike rivals Banco Santander SA and Bilbao Vizcaya Argentaria SA, both of which have huge foreign operations, Caixa only has a marginal presence outside its home market.

A full disposal would boost Caixa’s common equity tier 1 capital ratio, the most closely watched measure of banks’ health, by about 15 basis points.

Caixa has been a largely passive shareholder in the Vienna-based lender for more than a decade. Its ownership was initially part of efforts by Erste to fend off takeover attempts.

Caixa is highly focused on retail banking, with a very small investment banking operation. The bank is controlled by the Caixa Foundation, which manages the bank’s employee pension plan.