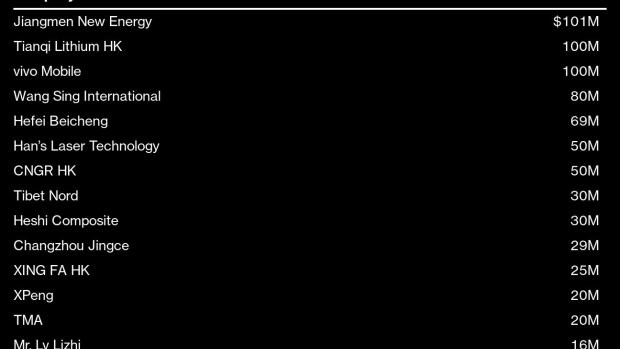 (Bloomberg) -- CALB Co., a Chinese battery supplier for electric vehicle makers, has raised about HK$10.1 billion ($1.3 billion) after pricing its Hong Kong initial public offering at the bottom of its marketed range, according to terms of the deal seen by Bloomberg News.

The Jiangsu-based company has priced the offering at HK$38 per share, according to the terms. The firm marketed about 265.8 million shares at HK$38 to HK$51 each. An external representative for CALB declined to comment.

The offering drew 15 cornerstone investors who agreed to purchase around $735.5 million worth of stock in the offering. They include Tianqi Lithium Corp., which began trading in Hong Kong in July, electric carmaker XPeng Inc. and phone manufacturer Vivo Mobile Communication Co.

CALB is the third company to raise over $1 billion through a first-time share sale in Hong Kong this year, as mid-to-large sized deals return to the Asian financial hub after a slow first half. Still, funds raised in the city are down about 78% since the start of January as rising interest rates drove volatility in equities and kept issuers on the sidelines.

Established in 2007, CALB makes lithium batteries for electric vehicles and other products. It operates major production bases in China, including Changzhou, Xiamen and Wuhan, according to its website.

The company supplies batteries to the EV brands of carmakers including Guangzhou Automobile Group, Chongqing Changan Automobile Co. and Zhejiang Leapmotor Technology Co., which raised about $800 million in its Hong Kong IPO and is slated to debut in the city on Thursday.

CALB ranked sixth by sales in the global EV battery market in July, overtaking South Korea’s Samsung SDI Co., according to data from Seoul-based SNE Research. The Chinese firm will use part of the proceeds for the construction of production lines of EV batteries and to invest in new production facilities in different parts of China.

Huatai International Ltd. is the sole sponsor of CALB’s Hong Kong IPO. The shares are scheduled to start trading Oct. 6.