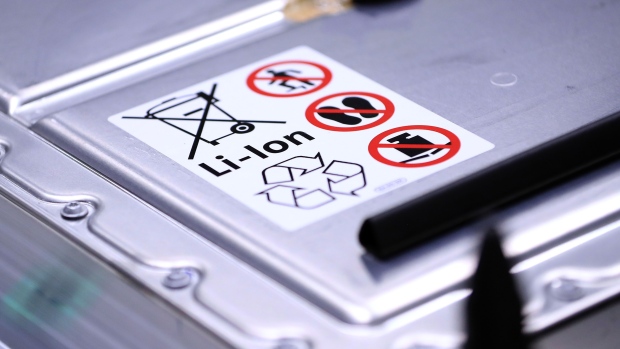 A recycling symbol and handling instructions sit on a lithium-ion automotive battery pack for a Volkswagen AG (VW) ID.3 electric automobile at the automaker's factory in Zwickau, Germany, on Tuesday, Feb. 25, 2020. The world’s largest automaker plans to eliminate carbon dioxide emissions by 2050 and will invest 33 billion euros through 2024 to build the industry’s biggest fleet of electric cars. Photographer: Krisztian Bocsi/Bloomberg , Bloomberg

(Bloomberg) -- Calb Co., a Chinese battery supplier for electric vehicle makers, has added more banks to arrange its planned Hong Kong initial public offering, which could raise as much as $1.5 billion, according to people familiar with the matter.

The Jiangsu-based battery maker selected Citigroup Inc., Credit Suisse Group AG and JPMorgan Chase & Co. as joint global coordinators for the first-time share sale, the people said. They will join Huatai International Ltd., which is the sole sponsor on the deal, according to a preliminary prospectus filed to the stock exchange in March.

Discussions are ongoing and more banks could be picked for the deal, the people said. Details of the offering such as size and timing could change as well, they added. Representatives for Citi, Credit Suisse and JPMorgan declined to comment, while a representative for Calb didn’t immediately respond to requests for comment.

At $1.5 billion, Calb’s IPO could be one of Hong Kong’s biggest in 2022, according to data compiled by Bloomberg. Companies have raised only $2 billion through first-time share sales in the Asian financial hub this year, far below the $20.6 billion raised in the same period last year. Most of the new listings are trading below their IPO prices.

Established in 2007, Calb makes lithium batteries for electric vehicles and other products. It operates major production bases in China, including Changzhou, Xiamen and Wuhan, according to its website.