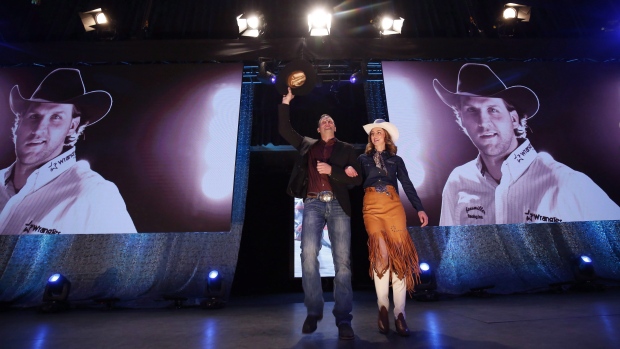 Chuckwagon driver Kurt Bensmiller waves as he's the first to be auctioned off during the Calgary Stampede chuckwagon canvas auction in Calgary, Alta., Thursday, March 22, 2018. , THE CANADIAN PRESS/Todd Korol

CALGARY - The Calgary Stampede has decided to postpone its annual chuckwagon canvas auction.

The event was scheduled for next Thursday but is being postponed indefinitely to protect the health and safety of guests, volunteers and employees from the threat of the novel coronavirus.

“We are in very close contact with Alberta Health Services and CEMA and will do our part,” said Stampede CEO Warren Connell in a statement.

“We know our community is strong, resilient and pulls together in times such as these. The Stampede is extremely grateful for the ongoing support and understanding of our community.”

Stampede CEO Warren Connell also said on Tuesday night that the organization had laid off a total of 890 workers -- 608 were casual part-time and the other 282 that were regular part-time and full time.

The auction is considered a bellwether for the health of the Calgary-based oil and gas industry, as many of the sponsors who pay to have their company names on the horse-drawn wagons in the July races are energy industry players.

Sponsorship bids for the 36 rigs competing last year totalled $3.29 million. The record was set in 2012, with just over $4 million pledged.

About 80 per cent of the tarp auction proceeds go to the driver; the rest is used for prize money, safety and other chuckwagon initiatives.
The auction has not been rescheduled, as the situation around COVID-19 continues to change.

The Stampede also cancelled its annual Aggie Days, which teaches students about agriculture and food production.

Roughly 8,000 students and teachers were scheduled to visit the event April 1-5.

The event will not be rescheduled this year.

Planning continues for the Stampede this year, but officials say they will react and adapt the event in co-ordination with the Calgary Emergency Management Agency.