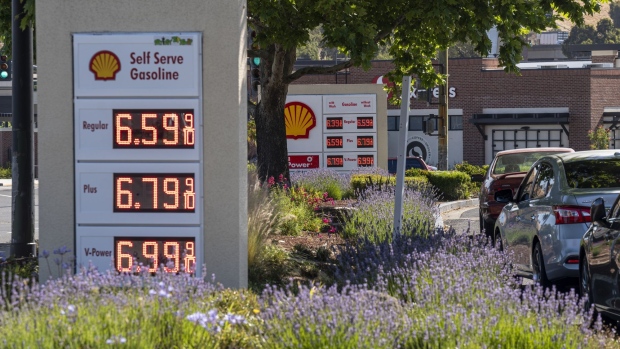 (Bloomberg) -- California has long had the US’s highest pump prices, but a gas-tax hike heading into the Independence Day weekend comes at a bad time.

At an average of $6.29 a gallon — which is almost 50% higher than it was a year ago — Californians already pay more for gas than residents of any other state, partly due to environmental regulations that require the sale of a less-polluting blend of fuel. The national average is $4.86 a gallon, according to auto club AAA. Also, the state already charges the second-highest gas tax nationwide — after Pennsylvania — at 51.1 cents a gallon.As of Friday, the fuel excise tax rate is set to rise 5.6% — adding about 3 cents a gallon — due to a statutory annual increase to keep with inflation, after state legislators rejected a proposal by Governor Gavin Newsom to suspend the increase for 12 months. The tax is used to fund transportation projects like repairing roads, raising an estimated $8.8 billion in 2021-22.

To cushion some of the blow, Newsom's office announced this week an inflation-relief package worth $17 billion, with millions of residents eligible for direct payments of as much as $1,050 based on income.

But those payouts won’t come until October, at the earliest, and months of elevated costs to fill up at the pump are already causing residents to rethink their driving habits.

In Los Angeles, a sprawling city known for its car-worshipping culture and long commutes, companies have been trying out ways to lessen the pain for employees.

"It's been getting difficult to get the team together, it's expensive,” said Chu, whose round-trip commute is 70 miles.

In cases where work from home is not an option, employers in California are getting creative about how they’re helping employees, according to Sarah Grimstead, a vice president at human resources firm Insperity.

One solar company with 22 workers in La Habra, about 25 miles southeast of Los Angeles, doled out gas cards, she said. Flexible shift times are also being used to encourage carpooling. Grimstead said in one case, a manufacturing company in Orange County with about 100 employees changed shifts around so workers could share rides.

On a personal level, Meghan Jenks used to regularly visit her 88-year-old mother on weekends, driving almost an hour from Sunland-Tujunga to Thousand Oaks — a trip that now costs her about $40. “Before it was a lot easier to just say, ‘hey, let's go visit my mom this weekend,’” she said. "We can’t do that anymore. I can't go visit her as often as I want to because I just can't afford to."