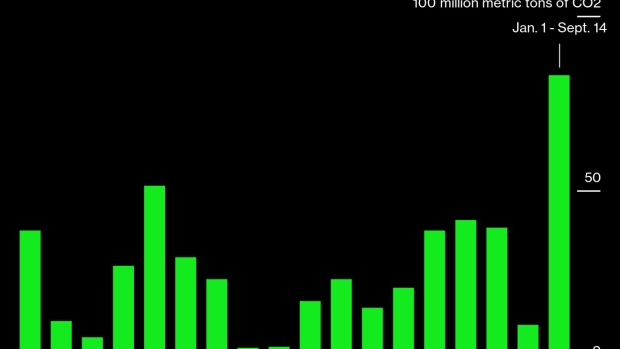 (Bloomberg) -- Giant fires are releasing unprecedented amounts of carbon dioxide and particulate-matter pollution into the atmosphere in California and Oregon, leading to the first increase in wildfire emissions in the U.S. since 2015.

In some spots, the intensity of fires this year has been up to hundreds of times higher than the average from 2003 to 2019, according to a statement from Europe’s Copernicus Atmosphere Monitoring Service, which observes blazes and the resulting smoke from space. The thick layer of smoke from the fires has crossed the continental U.S., graying out New York skies, and the agency forecasts it will reach northern Europe later this week.

“The fact that these fires are emitting so much pollution into the atmosphere that we can still see thick smoke over 8,000 kilometers (5,000 miles) away reflects just how devastating they have been in their magnitude and duration,” said CAMS senior scientist and wildfire expert Mark Parrington.

The wildfires, which started in mid-August and are still active, have burnt more than 5 million acres across the West Coast, killing dozens of people, destroying homes and worsening air quality. A beetle infestation that’s has killed over 150 million trees in California alone has left large amounts of tinder for the flames. That, coupled with hot and dry conditions, is breeding one of the worst fire seasons in the region.

Fire emissions, some of which can be re-absorbed within years when trees grow back, make up a small fraction of the additional carbon dioxide humans dump in the atmosphere through the burning of fossil fuels. The U.S.’s energy-related emissions stood at 4.8 billion metric tons of carbon dioxide in 2019 and the corresponding global figure stood at 33.1 billion metric tons, according to the International Energy Agency.

While carbon emissions contribute to long-term heating of the planet, particulate-matter pollution can cause health problems both in the short and long term. Smoke from California’s wildfires is affecting air quality thousands of kilometers away, with Copernicus satellites showing the smog spreading across the U.S. and parts of Canada. Cities in the Western U.S. have been among the world’s most-polluted cities for at least the past three days, according to OpenAQ data compiled by Bloomberg Green.