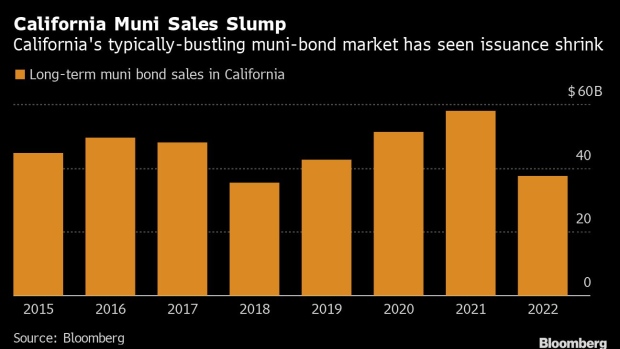 (Bloomberg) -- California’s municipal-bond market is typically the busiest in the nation. But this year, activity has quieted dramatically.

The Federal Reserve’s campaign to tame inflation by raising rates has dampened debt sales in the muni-bond market, especially bond sales used to refinance debt with higher interest rates. In California, the drop is especially notable. That’s because federal aid and better-than-expected tax collections are allowing the Golden State and its municipalities to eschew bond sales and pay for infrastructure projects with cash.

Debt sales from California-based municipal-bond issuers are down about 35% to approximately $37 billion year-over-year in 2022, over two times more than the broader US muni market’s 15% decline in issuance this year, according to data compiled by Bloomberg. As a result, California, typically the biggest state for municipal-bond sales each year, has fallen behind Texas and New York to No. 3 in the ranks of muni issuers in 2022, data compiled by Bloomberg show.

“With all the stimulus and recovery funding over the last several years, many issuers have had cash to finance projects,” said Andy Nakahata, regional head of public finance, West region at UBS Group AG. “That’s allowed them to cash fund a lot more versus fund projects with debt.”

Earlier this year, California officials announced a $98 billion budget surplus -- about half of which the governor said was available to spend for any purpose. California has been implementing measures to reduce its outstanding long-term debt by using cash for infrastructure projects, according to the state budget. Financing for about $3.2 billion worth of capital projects through fiscal 2024 will be funded through the state’s general fund -- those projects were initially set to be financed through the sale of revenue bonds, the budget detailed.

The Los Angeles Department of Water and Power reduced its capital budget by 15%, so there isn’t a need to sell bonds for new projects, according to Ann Santilli, chief financial officer. The agency has been spending less than expected on capital projects as a result of changes in planned work and challenges with supply chain and hiring.

Meanwhile, issuance to refinance outstanding debt has dwindled. Some issuers have had to scale back refinancing plans because higher rates have reduced potential savings.

The San Diego Unified School District, for example, decided not to sell nearly $50 million of debt for a refinancing in September as part of a larger bond sale, Jodie Macalos, executive director of financial planning and development for the school district, said in an interview. But it was still able to sell about $500 million of debt for new projects.

Though increasing bond yields have stung borrowers, it may be welcome news to wealthy Californian investors who now have a chance to earn much higher yields on new investments in the tax-free securities. By investing in state muni bonds, individuals in California’s highest tax bracket aren’t obligated to pay the 13.3% state income tax and a 37% federal levy on the income generated from their investments.

Municipal-bond yields have surged in 2022 and the yield on an index of California general-obligation bond debt due in 10 years stands at 3.3%, compared to as little as 0.7% in 2021, according to Bloomberg BVAL.

Margaret Hay, a director at Kore Private Wealth, said more debt issuance from California issuers would give investors and traders more insight into pricing levels, especially considering how volatile the muni market has been this year. The more debt issuance there is, the more clarity there is around what bonds are worth, she said.

“We need issuance, we need more,” she said.