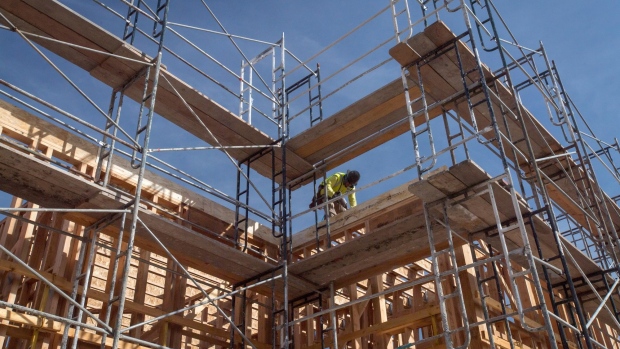 A worker builds framing during construction on a project for affordable housing at Brooklyn Basin in Oakland, California, U.S., on Tuesday, Nov. 12, 2019. About 15% of the new homes at the development in Oakland's Brooklyn Basin district -- an ambitious decade-long transformation of derelict land into a vibrant waterfront neighborhood -- will come at rents affordable to those left behind by the region's tech-fueled boom. Photographer: David Paul Morris/Bloomberg , Bloomberg

(Bloomberg) -- A California agency voted Wednesday to reserve some of the state’s limited private activity bonds to non-housing uses, providing an opportunity for projects such as a private-equity backed train to Las Vegas and a controversial desalination plant to apply for the coveted financing.

At its meeting, the California Debt Limit Allocation Committee in a split vote approved divvying up $4.3 billion of its bond capacity, an amount determined under population-based federal guidelines, mostly to projects that boost affordable housing. Of that, $510.4 million will go toward qualifying non-housing projects such as the electric rail proposed by a company backed by Fortress Investment Group and Poseidon Water’s seawater facility in Huntington Beach that has drawn the ire of environmental groups.

Tony Sertich, representing State Controller Betty Yee on the three-member board, supported giving all of the state’s allocation to housing since such projects draw additional federal subsidies. Many people, particularly advocates against the development of the desalination plant, also pressed the committee for the same, citing the state’s deepening homelessness and affordability crises. Housing developers are anticipated to need about $9 billion of bonds this year, far more than what’s available.

Still, Gayle Miller, representing Governor Gavin Newsom, said California has other needs and that no other governor has invested more in housing. She also noted that rail projects when awarded bonds draw significant federal leverage as well.

“Without infrastructure, we can’t build more housing,” said Treasurer Fiona Ma, chair of the board. She had initially proposed giving $600 million of the state’s allotment to non-housing but agreed to the Newsom administration’s wish to carve out $89.6 million from that amount to go to a housing program for veterans. Sertich was the only vote against the measure reserving bonds for non-housing uses.

The committee had previously awarded 15% of its annual bond allotment to the Las Vegas train project from developer Brightline Holdings. But the company failed to entice investors for its September 2020 debt offering. It then pulled an application last year with the intention of reapplying in 2022 while it worked to establish a California station closer to Los Angeles, which would make the project more palatable to potential investors.

Meanwhile, Poseidon Water, which already operates a desalination plant in Carlsbad, is working on another facility to produce 50 million gallons of water daily. It had previously said it would apply for $1.1 billion of the state’s private activity bonds.

“We are encouraged that California continues to allocate a portion of this limited resource to its Exempt Facilities Program that benefits projects like the Huntington Beach Desalination Facility to help deliver a safe, reliable, climate-resilient water supply to all Californians,” Poseidon Water spokesperson Jessica Jones said in an emailed statement.

Ben Porritt, a spokesperson for Brightline, didn’t respond to requests for comment.

Since late 2019, demand for the bonds has outstripped what the state can give out. This year, the committee anticipates requests totaling $13.2 billion, the bulk from housing developers.