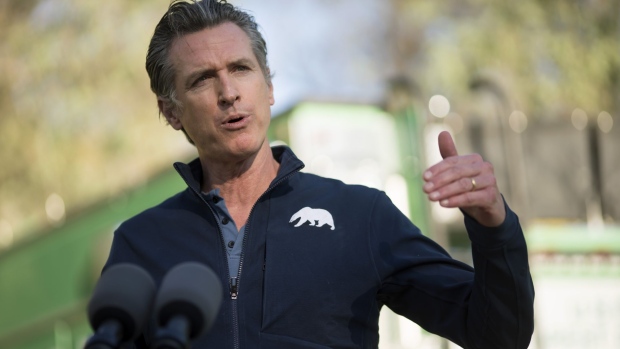 California Governor Gavin Newsom speaks to highlight investments made by the Bipartisan Infrastructure Law in wildfire preparedness and resilience in San Bernardino, California, U.S., on Friday, Jan. 21, 2022. The U.S. Forest Service this week said it will target millions of acres of grasslands and forests for prescribed burns and thinning to fight escalating wildfire risk across the United States. , Bloomberg

(Bloomberg) -- California Governor Gavin Newsom will air television ads in Florida calling on the state’s residents to join in the fight against Republican leaders who are imposing restrictions on freedoms, escalating his feud with conservative-led states.

“Freedom is under attack in your state,” Newsom said in the ad. “I urge all of you living in Florida to join the fight, or join us in California, where we still believe in freedom.”

The first-term Democrat, running for re-election this year, has been trying to position himself and liberal-leaning California as foils against Republican governors of Florida and Texas who champion conservative policies such as restricting abortion access.

Newsom also is contending with the perception that employers and residents are leaving the world’s fifth-largest economy for lower-taxed Texas and Florida. Silicon Valley-bred companies including Tesla Inc., Oracle Corp. and Hewlett Packard Enterprise Co. have moved headquarters to the Lone Star State. Miami, meanwhile, has been trying to position itself as a new tech and crypto center.

The politically ambitious former mayor of San Francisco has embraced battle with Republicans through jabs on social media as well as through policy. His budget for the fiscal year beginning (July 1) will give greater consideration for tax credit awards to companies moving from states with restrictive laws on abortion and LGBTQ+ rights.

He and other California leaders have also vowed to make the most-populous state a haven for abortions. Voters in November will decide whether to enshrine the right to the procedure in the state constitution.

Newsom, 54, also recently joined Donald Trump’s Truth Social platform, posting about issues such as crime. While the California governor has been expanding his national profile, he told the San Francisco Chronicle in May that he has “sub-zero interest” in running for president in 2024.