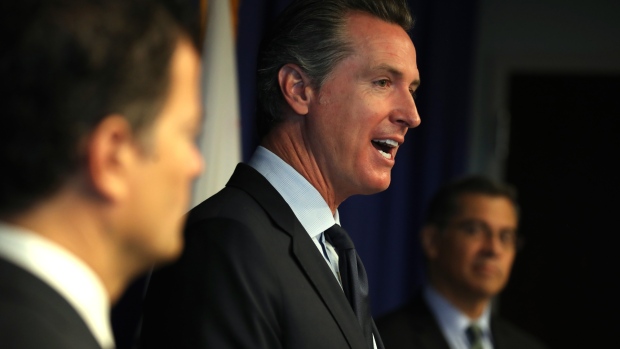 (Bloomberg) -- People across Northern California are voicing anger, particularly on social media, about the way utility giant PG&E Corp. is handling an unprecedented blackout that’s set to plunge millions of people into darkness.

California Governor Gavin Newsom isn’t one of them.

PG&E’s actions are necessary, Newsom, a Democrat, told reporters on Wednesday while visiting Los Angeles to sign housing legislation. “What they’re doing is appropriate under the circumstances,” he said. When asked what he thought about the job PG&E is doing so far amid the shutoffs, Newsom noted that “no one is happy” about outages.

Customers, meanwhile, were blasting PG&E online, mostly because its website kept crashing, keeping people from finding out whether their homes were among those losing power. The anger may have even taken a dark turn: the California Highway Patrol is investigating the shooting of a PG&E truck in Colusa County after the shutoffs were announced Tuesday.

To be clear, Newsom said, PG&E wouldn’t have been in this position if the utility had “done their job over the last few decades and invested in their infrastructure and transmission lines.” Shutoffs of this size, he said, “should never happen again.” He said in a separate statement that frustration over the shutoffs was warranted.

PG&E was forced to file for bankruptcy in January after its power lines ignited a series of deadly and devastating blazes, saddling the company with an estimated $30 billion in liabilities.

Other California politicians were less understanding of PG&E’s shutoffs on Wednesday. State senator Scott Wiener, a San Francisco Democrat, called the mass blackouts affecting more than 2 million people “a completely unacceptable state of affairs.” Napa Democrat Bill Dodd said “many of my constituents are disturbed that the power was shut down before the winds started to pick up.”

When asked about declaring a state of emergency, a move that several cities have called on Newsom to make, the governor said, “we’re monitoring the necessity of that.”

Newsom said his administration has been in “constant contact” with local leaders and noted that this year’s budget has $75 million in funds for communities affected by such blackouts.

Once the power is shut off, it could take days for it to come back on since workers have to physically assess transmission lines to ensure they’re safe. “It’s not necessarily that we don’t want or can’t turn the lights back on, but public safety dictates that we have to do a lot of that manual labor first,” Newsom said.

Newsom, who uses Twitter frequently to comment on national issues and trade barbs with President Donald Trump, on Wednesday was noticeably quiet on the platform with regards to the blackouts. He opted instead to retweet posts from the state office of emergency services and the official governor’s account maintained by press staffers.

To contact the reporters on this story: Romy Varghese in San Francisco at rvarghese8@bloomberg.net;Christopher Palmeri in Los Angeles at cpalmeri1@bloomberg.net

To contact the editors responsible for this story: Elizabeth Campbell at ecampbell14@bloomberg.net, Lynn Doan, Kara Wetzel