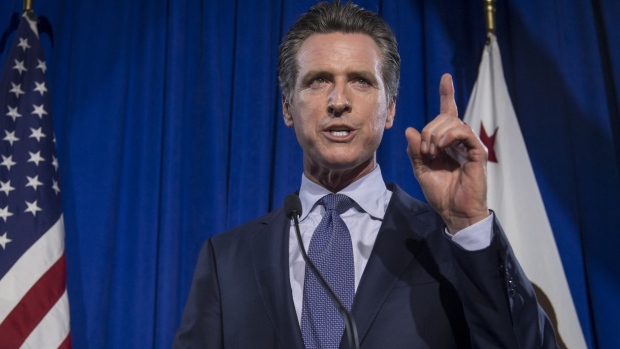 (Bloomberg) -- California Governor Gavin Newsom proposed a "digital dividend" that would let consumers share in the billions of dollars made by technology companies in the most-populous U.S. state.

In his "State of the State" speech on Tuesday, Newsom said California is proud to be home to tech firms. But he said companies that make billions of dollars "collecting, curating and monetizing our personal data have a duty to protect it. Consumers have a right to know and control how their data is being used."

He went further by suggesting these companies share some of those profits. "California’s consumers should also be able to share in the wealth that is created from their data," Newsom said. "And so I’ve asked my team to develop a proposal for a new Data Dividend for Californians, because we recognize that data has value and it belongs to you."

Newsom didn’t describe what form this dividend might take, although he said "we can do something bold in this space." He also praised a tough California data-privacy law that will kick in next year.

The world’s largest internet advertising companies, including Alphabet Inc.’s Google and Facebook Inc. are based in California. Google made more than $30 billion last year, while Facebook earned over $22 billion.

--With assistance from Romy Varghese.

To contact the reporter on this story: Kartikay Mehrotra in San Francisco at kmehrotra2@bloomberg.net

To contact the editors responsible for this story: Jillian Ward at jward56@bloomberg.net, Alistair Barr, Andrew Pollack