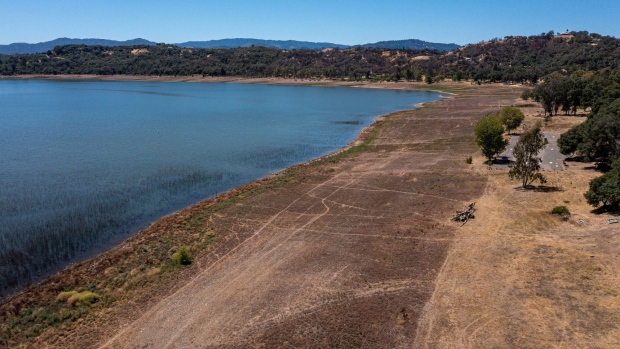 Lake Mendocino during a drought in Mendocino County, California, US, on Wednesday, Aug. 10, 2022. California water prices are at all-time high as a severe drought chokes off supplies to cities and farms across the Golden State. , Bloomberg

The Democratic governor said the new strategy will focus on capturing and storing more water runoff from big storms, recycling, desalination projects and conservation. The actions are needed in light of recent state projections indicating that water supplies could fall 10% by 2040 due to hotter, drier weather, he said.

“We can’t do the same damn thing anymore, and I think all of us recognize that,” Newsom said Thursday in front of a desalination plant being built to treat brackish water in Antioch, California.

Newsom said he wasn’t ready yet to call for statewide residential water restrictions, noting that local water mandates that were issued earlier this summer make more sense right now given that water conditions vary by geography. However, Newsom said his plan includes the ability to call for mandatory cuts if local agencies aren’t able to improve their conservation efforts.

The announcement comes as Newsom has faced criticism from both environmentalists and farmers for his handling of a drought that’s in its third year. Environmental advocates say growers are getting a disproportionate amount of water at the expense of vital ecosystems. Farmers say his administration, despite a record high-budget surplus, is ignoring an industry in crisis as water access is cut off and hundreds of fields go unplanted. In addition, they say the state diverts too much water into the ocean that could be used to irrigate crops.

Newsom said the state’s new actions will build on $8 billion in state investments announced over the past two years designed to address the drought. The plan to store more water above and underground, recycle wastewater and desalinate ocean and brackish water will create new supplies for more than 8.4 million households, he said.

“We have a renewed sense of urgency to address this issue head on,” Newsom said.