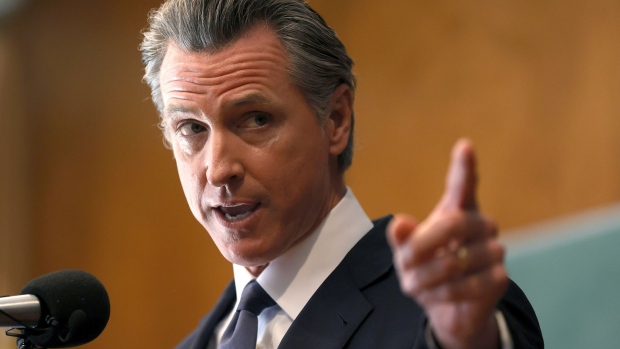 (Bloomberg) -- California Governor Gavin Newsom said he plans to quickly sign a bill making its way through the state legislature that would allow citizens to sue manufacturers, distributors and sellers of banned assault rifles and ghost guns.

The bill, which passed the state Senate Monday and heads to the Assembly, mimics a Texas law that makes abortions illegal after about six weeks of pregnancy and allows citizens to sue doctors or anyone who helps facilitate an abortion. The US Supreme Court in December allowed the Texas law to remain in effect while challenged in a lower court.

“We mean business. We want to save lives,” Newsom said. “They used that law to put women’s lives at risk. We are going use that door they opened, that process, to enforce a private right of action to get these guns off the streets.”

Newsom and fellow Democrats who control the statehouse vowed quick action on a package of about a dozen gun bills, a day after a shooting at an Uvalde, Texas, elementary school left 19 children and two teachers dead. That shooting, and another at a Buffalo, New York, grocery store almost two weeks go where 10 people were killed, has reignited the nation’s perennial debate on how to deal with gun violence and left Democrats across the country considering ways to strengthen local gun laws in the face of Washington gridlock over the issue.

A 2021 New York law authorizing the state to sue gun manufacturers over some gun violence survived a legal challenge from Glock Inc. and Smith & Wesson Brands Inc. Wednesday with a federal judge tossing their lawsuit to block the law.

The California bills include stronger laws against so called ghost guns, prohibiting marketing of certain firearms to minors, requiring schools to investigate credible threats, not allowing gun shows on state property and funding a violence research center at the University of California, Davis.

“The CA experience is that more gun control is unlikely to stop mass shootings,” he wrote.

Newsom, speaking at the statehouse complex just blocks from where a gang-related mass shooting in early April left 6 people dead, said he’s in talks with lawmakers about adding an urgency clause to some of the bills, meaning they could take effect almost immediately once signed instead of at the start of the new year.

“I will enthusiastically be signing these bills by the end of next month,” Newsom said.