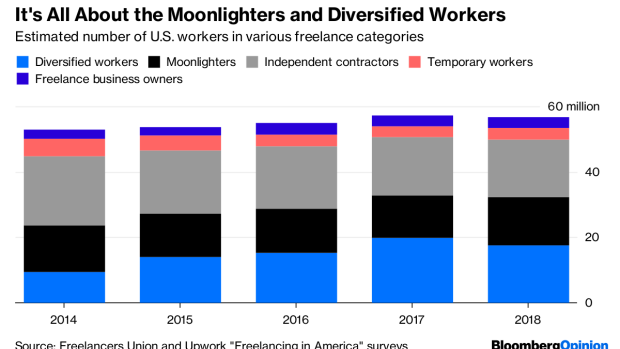 (Bloomberg Opinion) -- California’s State Assembly has just passed a bill aimed at forcing Uber, Lyft and other so-called gig-economy companies to treat their workers as employees rather than as independent contractors. Uber, for example, has long argued that its drivers weren’t actually employers, labeling them “driver-partners.” But the California Legislature didn’t buy that argument. The new law stipulates that companies can only contract out tasks that are “outside the usual course” of the company’s business, and that contractors must be “free from the control and direction” of the company. Any workers who aren’t contractors must receive benefits, like health insurance and paid time off.

Some expect the new law to lay waste to the gig-economy business model. California is a huge, important market — some estimate that the change could cost Uber as much as $500 million a year. And there’s the chance that other states will follow California’s lead. Uber immediately denied that the ruling applied to it, saying that drivers weren’t part of its usual business, but the argument seems unlikely to hold up in court.

But the truth is that gig-economy business models weren’t looking very healthy anyway. Although it isn’t unusual for a company to record losses before going public, Uber and Lyft’s losses were unusually large:

Uber continues to be a cash-burning machine. In the second quarter of 2019, partly because of costs associated with going public in May, it had a net loss of  $5.2 billion — more than 10 times the highest estimates for what the new California law could cost it. But even in a normal quarter, the company’s losses are on the order of more than a half-billion dollars, and it has never made an operating profit.

These huge losses could be justified if the company were expanding rapidly, but although it continues to book more rides, its revenue is barely rising:

Lyft is also losing money. Fundamentally, if these companies can’t grow their way out of losses, their business model is doomed, whether their drivers are treated as employees or not. In its IPO prospectus, Uber warned that it may never achieve profitability. New laws like California’s might allow gig-company founders a face-saving way to claim that it was regulation that killed them, not the bleak unit economics of the basic business model. But the truth is that any business that could only stay afloat by giving its workers fewer benefits than Walmart or McDonald’s probably wasn’t long for this world in any case.

The importance of California’s new law could go far beyond the gig economy. It could represent the first real attempt to address the rise of contracting and outsourcing in general — what some call the fragmented workplace.

The gig economy is a tiny portion of the U.S. labor market. And the number of independent contractors(1) has actually shrunk a bit in recent years. But together with so-called diversified workers, who have a variety of income sources, these contingent workers number in the tens of millions:

The rise of contingent-work arrangements isn't some dramatic recent trend, and it might figure in the decline in labor’s share of national income and the failure of compensation to keep pace with productivity.

California’s new law could therefore open the door to a more comprehensive attack on inequality and wage stagnation. Forcing companies to do more for contractors could be one part of a strategy to redistribute corporate income toward workers.

Even more intriguing is if it marks the first step toward a comprehensive offensive against outsourcing itself. Outsourcing goes way beyond the use of freelancers or independent contractors; companies now regularly contract out many of their business functions. This can make it easier for employers to evade regulations: If one fly-by-night contractor is punished for mistreating its workers and folds, three more equally shady companies may stand ready to take its place.

California’s law could signal that state legislatures are more interested in restraining not just the gig economy or the use of independent contractors, but the rise of contracting in general. If so, it may prove much more important than the relatively minor fight over Uber and Lyft drivers.