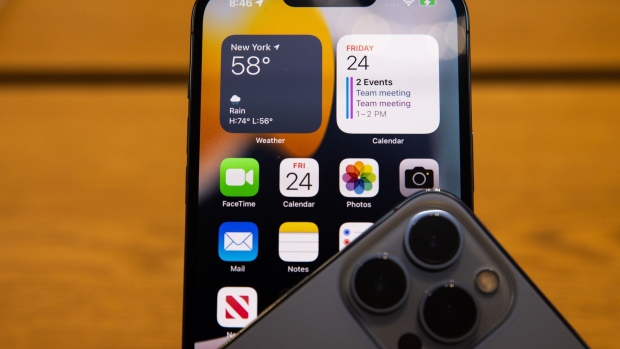 Apple iPhone 13 Pro Max smartphones for sale at a store in New York, U.S., on Friday, Sept. 24, 2021. Apple Inc. is releasing its iPhone 13 lineup, testing whether new camera technology and aggressive carrier deals will get shoppers to snap up a modest update of last years model. Photographer: Jeenah Moon/Bloomberg , Bloomberg

(Bloomberg) -- California is preparing to add its voice to the legal dispute between Apple Inc. and Epic Games Inc. over how the iPhone maker runs its App Store.

Apple is appealing a federal judge’s conclusion that the company violated California’s Unfair Competition Law by barring app developers from steering customers to payment methods outside its store.

The state attorney general’s office said in a court filing Wednesday that it wants to take a position on how the law is interpreted, but that it would be premature to weigh in until Apple fleshes out its arguments for why the Sept. 10 ruling by U.S. District Judge Yvonne Gonzalez Rogers was wrong.

Apple faces a number of antitrust lawsuits in and outside the U.S. seeking to open up the App Store to competition. Apple is contending with monopolization enforcement investigations brought by federal and state agencies, and legislative bids to restrict its business practices.