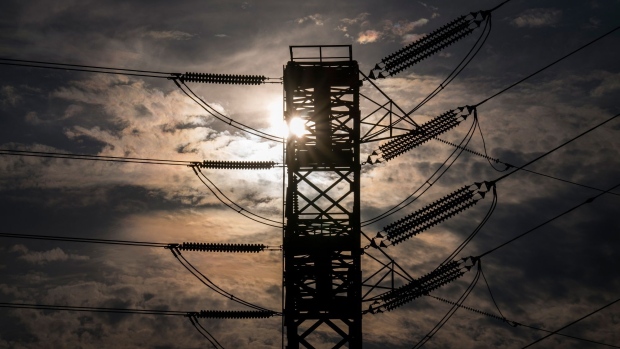 Power lines stand in Crockett, California, U.S., on Monday, Aug. 17, 2020. As many as 10 million Californians were supposed go dark on Monday in an unprecedented series of rolling blackouts designed to save the power grid from the worst heat wave in 70 years. But temperatures fell, people turned down their air conditioners and utilities called off the outages. Photographer: David Paul Morris/Bloomberg , Bloomberg

(Bloomberg) -- Edison International could cut power to some Southern California homes and businesses on Thanksgiving as strong winds are forecast to return to the rain-deprived region.

The utility owner hasn’t determined how many customers could be affected by the outages, intended to prevent power lines from sparking wildfires during the gusts. Power would likely be out until Friday evening, Southern California Edison spokeswoman Taelor Bakewell said. The state’s utilities have resorted to preemptively cutting power after electrical lines touched off a series of deadly blazes in recent years.

Critical fire weather conditions could develop Thursday afternoon through Saturday, according to a National Weather Service forecast. Although the annual rainy season has begun in far Northern California and snows have returned to the Sierra Nevada Mountains, Southern California has remained largely dry. As a result, a record-breaking fire season that has already seen more than 4.2 million acres burned across the state this year could linger into December.

PG&E Corp., which serves most of Northern and Central California, reported Tuesday that it is not considering public safety blackouts this week. Sempra Energy’s San Diego-area utility did not respond to a request for comment.