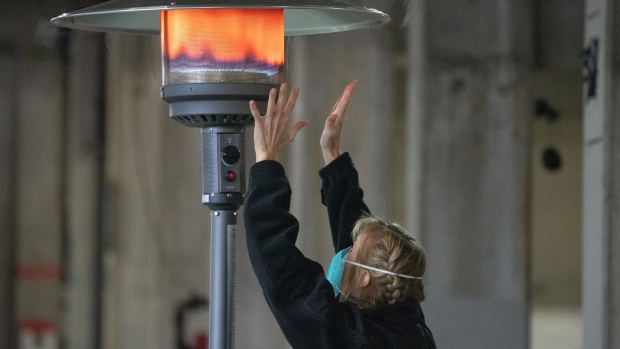 A healthcare worker warms their hands by a space heater at a drive-thru Covid-19 vaccination site at the Long Beach Convention Center in Long Beach, California, U.S., on Friday, Jan. 29, 2021. The city of Long Beach this week expanded distribution of vaccines to food workers, the first group of essential workers in Los Angeles County outside the healthcare industry to be offered the critical shots. Photographer: Bing Guan/Bloomberg , Bloomberg

(Bloomberg) -- California is committing to a plan that will make it the first US state to phase out gas-fueled furnaces and water heaters in homes, a move environmentalists are betting will provide a template for other states.

The Golden State will ban the sale of all new natural gas-fired space heaters and water heating appliances by 2030, under a proposal unanimously approved by the California Air Resources Board on Thursday.

“We’re really hopeful that this is the beginning of a domino effect and other states will follow California’s lead,” said Leah Louis-Prescott, a senior associate at RMI , a non-profit focused on the transition to clean energy.

The proposal is part of a roadmap of commitments that the state is pursuing to shrink its carbon footprint and comply with federal air-quality standards. That far-reaching plan contains measures that would allow the state to transition away from burning gas and reduce emissions that cause air pollution and contribute to smog.

Since California still gets about 40% of its power from fossil fuels, the transition won’t eliminate carbon emissions. The state is targeting a carbon-free grid by 2045. The proposal does not include gas stoves, but about 50 cities and towns in California, including San Francisco, have adopted regulations that ban or discourage the use of gas-fueled stoves in new buildings.